Did Obama Ever Offer Condolences For the Murder of Colleen Hufford? No! Did He Send An Aide To Praise Oklahoma Muslims In The Wake of Hufford's Beheading? YES!


OKLAHOMA CITY – Oklahoma Muslims marked the end of the yearly pilgrimage to mecca with communal prayer and celebration called Eid Ul-Adha on Saturday.

Leaders of the Islamic Society of Greater Oklahoma City say it’s been a tough month for Muslims here in Oklahoma after being associated with the beheading at Vaughan foods in Moore.

But the Muslim community received the highest form of praise from the White House for their hard work in helping rebuild the Moore community after a destructive tornado tore through the city in 2013.

Today, an official from Washington D.C. flew in to Oklahoma to present a special thank you to the Muslim congregation. He read a message from President Barrack Obama, extending warm greetings from the American people during the Muslim holiday.

“Your service is a powerful example of the powerful roots of the Abrahamic faiths and how our communities can come together with shared peace with dignity and a sense of justice,” President Barack Obama said.

The Imam, the leader of the prayer service, stated during his sermon that the Muslim faith has been called a “cancer that needs to be cut off from the American society.”

Now, with the recent praise, Oklahoma Muslims have been reassured that they are apart of the American society.

Let us be clear, Oklahoma Muslims were not unfairly associated with a beheading. The beheader,
Alton Nolen, attended services at the very same Mosque Obama sent his emissary to here.

Here's some information on that Mosque and it's former Imam, Suhaib Webb:


Suhaib Webb, an Imam with ties to former Al Qaeda mastermind Anwar al-Awlaki, had also previously been the leader of the Islamic Society of Greater Oklahoma City, which had been attended by Alton Nolen — the man who on Thursday beheaded a former coworker after recently converting to Islam, Breitbart News has learned.

Webb now serves as Imam of the sister organization of the mosque attended by Boston Marathon bombers Dzhokhar and Tamerlan Tsarnaev.

Imam Suhaib Webb has a history of ties to radicalism. FBI surveillance documents found that he was a known confidant of Al Qaeda mastermind Anwar al-Awlaki.

Just two days before the September 11, 2001 attacks on America, Webb spoke at a fundraiser with Awlaki with hopes to raise funds for Atlanta-based H. Rap Brown, a man that shot and killed two police officers.

The FBI documents also found that “Webb and Awlaki may be associated with the Muslim American Society,” which is a group described by the Investigative Project on Terrorism as being “founded as the United States Chapter of the Muslim Brotherhood.”

Nolen took a picture of himself (above) September 5th, just three weeks before he brutally murdered an innocent woman, standing in front of the gates of the Islamic Society of Greater Oklahoma City. 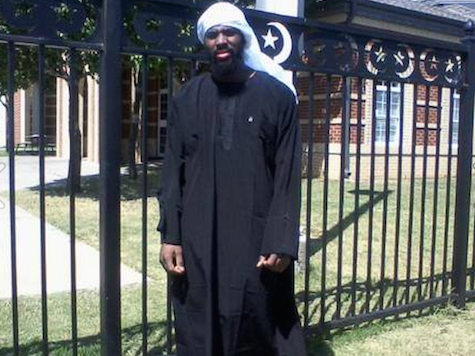