Peace to Islam Is Not To Live In Peace With Others - Islam Seeks To Make Us Rest In Peace, So They Can Be At Peace With Allah 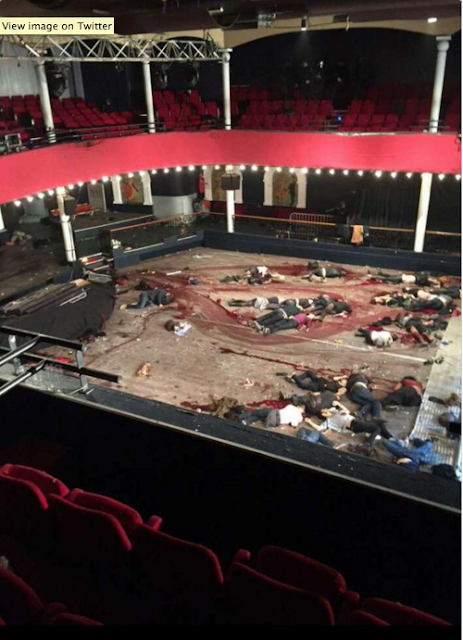 And THAT will never happen.

Mark Stein, "...don't worry: we already have a hashtag (#PrayForParis) and doubtless there'll be another candlelight vigil (and someone playing 'Imagine') of weepy tilty-headed wankers. Because as long as we all advertise how sad and sorrowful we are, who needs to do anything?
Futile sentiments expressed by a castrated culture should be addressed in the language they comprehend.
Witness the video clip of a pianist performing Lennon's "Imagine" within hours of the barbarous bloodletting at Bataclan, combined with the hipster/eifel/peace logo - a combination of artistically expressed sentiments of surrender to borderless, godless peace=chaos.
Pitiful to witness so many surrender to bleeding heart suicidal platitudes.
Perhaps an attempt to communicate in the suicidal hipster language they respond to we reach a thread of survival remaining in a few more .
Interlace another of Lennon's songs, "All we are saying, is give peace a chance", a song which lends itself to sound like a scratched 45 record skipping on a record player - insert gruesome images reminding viewers of each of the incidents on this list flashing between skips ISIS Reign Of Terror: Complete Timeline Of ISIS Attacks Since 2006 Until Paris Attacks between each skipped line "All we are saying, is give peace a chance" to illustrate/highlight how time reveals that kumbaya efforts have morbidly failed repeatedly.
Released in 1971, Imagine has long been an iconic but controversial song for it’s statements asking listeners to imagine no religion and no possessions as a means to make the case for people not fighting and killing each other, asking listeners instead to “imagine all the people, living life in peace”
which in reality results in "imagine all the people, dying to rest in peace" as Islam was given free reign could provide a much needed reality check
Posted by Pastorius at 1:23:00 pm

FWIW...the image you provided is of the inside of the Bataclan Theatre, where the Eagles of Death Metal were performing to a sold out crowd. Interesting tidbit:
Before Jesse Hughes was a drug-addled, pelvis-swiveling, mustachioed wildman, he was a speechwriter for the Republican Party."I’m a right-winger, man. I believe God made men and women and Sam Colt made them equal."