Record 94,708,000 Americans Not in Labor Force; Participation Rate Drops in May

(CNSNews.com) - A record 94,708,000 Americans were not in the labor force in May -- 664,000 more than in April -- and the labor force participation rate dropped two-tenths of a point to 62.6 percent, near its 38-year low, the Labor Department's Bureau of Labor Statistics reported on Friday.
When President Obama took office in January 2009, 80,529,000 Americans were not participating in the labor force; since then, 14,179,000 Americans have left the workforce -- some of them retiring and some just quitting because they can't find work.
"By almost every economic measure, America is better off than when I came here at the beginning of my presidency," President Obama told the people of Elkhart, Indiana three days ago. "We cut unemployment in half, years before a lot of economists thought we would."
The unemployment rate in May dropped to 4.7 percent, BLS reported, less than half of its Obama-era high of 10 percent in October 2009.
But the labor force participation rate has deteriorated over Obama's two terms.
When Obama took office in January 2009, shortly before the recession hit, the labor force participation rate was 65.7 percent. The following month, it reached an Obama-era high of 65.8 percent, and then it began its seven-year downward spiral, hitting 62.4 percent in September 2015, its lowest point since 1977.
The 62.6 percent participation rate in May 2015 compares with 62.8 in April and 63.0 in March. (BLS noted that the rate has declined by 0.4 percentage point over the past two months, offsetting gains in the first quarter.)
In May, according to the Labor Department's Bureau of Labor Statistics, the nation’s civilian noninstitutional population, consisting of all people 16 or older who were not in the military or an institution, reached 253,174,000. Of those, 158,466,000 participated in the labor force by either holding a job or actively seeking one.
The 158,466,000 who participated in the labor force equaled 62.6 percent of the 253,174,000 civilian noninstitutional population.
BLS points to retirements among the aging baby boom generation as a key factor affecting the labor force participation rate. But the weak job market has caused other Americans to give up job-hunting in favor of staying home or going back to school.
BLS said the economy added a disappointing 38,000 jobs in May, well below analysts' estimates of 158,000.  Over the past three months, job gains have averaged 116,000 per month.

The number of long-term unemployed (those jobless for 27 weeks or more) declined by 178,000 to 1.9 million in May. These individuals accounted for 25.1 percent of the unemployed.

The number of persons employed part time for economic reasons (also referred to as involuntary part-time workers) increased by 468,000 to 6.4 million in May, after showing little movement since November. These individuals, who would have preferred full-time employment, were working part time because their hours had been cut back or because they were unable to find a full-time job.

Within manufacturing, employment in durable goods declined by 18,000 in May, with job losses of 7,000 in machinery and 3,000 in furniture and related products.

Employment in professional and business services changed little in May (+10,000), after increasing by 55,000 in April.

Employment in other major industries, including construction, wholesale trade, retail trade, transportation and warehousing, financial activities, leisure and hospitality, and government, changed little over the month. 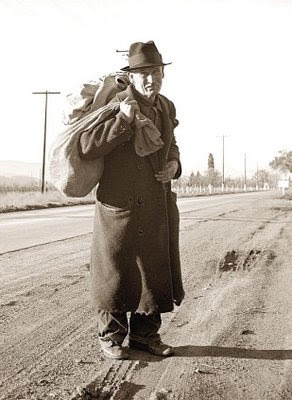 HOPE AND CHANGE
Posted by midnight rider at 6:32:00 pm