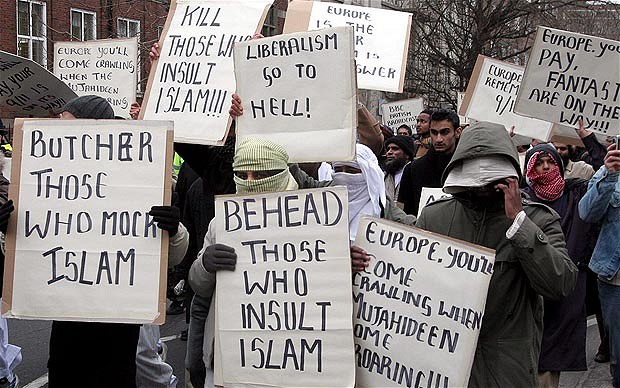 THANKS OBAMA: Muslim pervert exposes himself, then pees in a sink in a ladies bathroom at Back Bay Station in Boston
*****

Muslim pervert exposes himself, then pees in a sink in a ladies bathroom at Back Bay Station in Boston

Coming to a ladies' room near you and me.

IndependentSentinel: Huma Abedin and Our Government

The agenda of the IMMA? In their own words, it is “to grow an unassimilated, aggressive population of Islamic supremacists who will gradually but dramatically alter the character of the West”.

John Bolton: "I think it's important that we try and say at the outset every time the subject comes up, that we are talking about politics and ideology here. This is not a question of religion. And those who say that when you talk about radical islam you are insulting muslims all over the world are simply engaged in propaganda. (applause) It's actually muslims themselves who felt the worst effects of Islamic terrorism and who suffer under its rule in places as diverse as Iran and the caliphate that ISIS now holds. King Abdullah of Jordon, who is not simply the muslim king of a muslim country, unlike our president...." (ba dum bum~tzzzz) John Bolton August 21 2016 ff 5:19-6:10 for full effect/context