Islam--Is It Only for Countries with Low IQ? 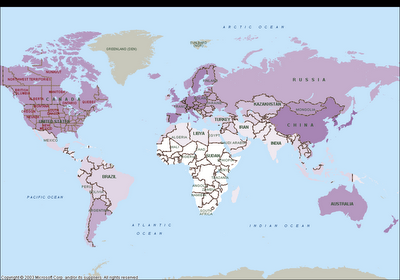 The tabular data above comes from Lynn and Vanhanen's IQ and the Wealth of Nations. For a good review of Richard Lynn's more recent and comprehensive Race Differences in Intelligence, look here. 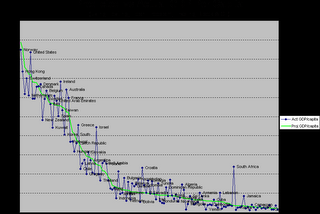 Here is another fine analysis of the concept of GDP vs. IQ--with the element of free market rules thrown in.

It is possible that some individual nations are misplaced on the above table, with average IQs either a bit higher or a bit lower than stated. But it is possible to detect trends by looking at different groupings of nations and their average IQ.

Given that population average IQ needs to be at least 90 for a modern technology based nation to function, immigration policy should be oriented toward inviting high value immigrants.

Observing what happened to Zimbabwe's prosperity after Robert Mugabe drove the most prosperous (and presumably most intelligent) farmers from their land, provides a good example of what NOT to do. Idi Amin's actions in Uganda provide another example. Fidel Castro's actions in Cuba provide a third. You don't want to drive out your intelligent and resourceful groups.

Update (26Dec06): Visit this Fourmilab page for a graphic illustration of the change in average global IQ with projected population trends. Accompanying the animated graphic is a thoughtful discussion of some of the issues involved in projecting trends in global intelligence.

Thanks to an Audacious Epigone commenter.

Originally published at Al Fin under a different name, and previously posted at Al Fin Potpourri under the same name.

I don't believe IQ is due to genetics, and the fact that the IQ's in American children are rising (believed to be the result of video-games) demonstrates that IQ can be nurished or destroyed by culture.

Societies that reward critical thought and innovation tend to get more of it.

Societies that punish new ideas and reward memorizing the Quran tend to linger is dispair where the only way out is to blame Israel and America for all their problems.

We should also remember that there are thousands of highly successful Arab/Muslim scientists in the world. Most of them just happen to be called "Americans".

I think IQ is also heavily influenced by nutrition. I think Al Fin has posted on that subject previously, if I am not mistaken.

Genes merely set the ceiling for potential IQ. Environmental factors such as nutrition determine whether the individual reaches his genetic ceiling. In the case of the nations on the map with lighter coloration--lower mean population IQ--there is little doubt that the environment is deficient in terms of nutrition and disease prevention/treatment.

There is also little doubt that the population mean IQ would still be different (lower) than in the darkest purple countries, even with optimal environmental factors.

IQ is distributed normally--as a bell curve. The arab scientists who migrate to opportunity societies are obviously at the extreme upper end of their bell curves. The duller arabs tend to remain behind to study the Quran.

All interesting stuff. Can't claim to know the answer to the Nature Vs. Nurture debate, but have you looked at the research out there regarding IQ, birth defects and the rates of consanguinity in Arab countries?

The rate of first cousin marriages in Arab countries is very high. It varies by country, but ranges from 25% to 60%+

That was amazing to me.

Al Fin,
There is no doubt that consanguinous marriages do not help Arabs on the Bell Curve.

IQ is too plastic to reflect innate intelligence:

check my blog, I refute racial differences in IQ with scientific data and go into depth about all the many environmental factors with evidence and scientific data.

first of all iq really doesn't show talent at all second there has never been any eaxct test in those countries (perhaps palestine and iran ant etc )third iq doesn't have anything to do with religion or so on there are so many factors that the most important is nutrition and you see that the average iq in any country has direct connection with gdp (gross domestic product ) any country which has a higher gdp , well it's population has a higher average iq then perhaps many of these people are succesful and scientists but their names are written as amercain so what you have of declared is so redecilious and religion and bilifes do not have anything to do with iq then perhaps a high percentage of the population of these countries are only called muslims that many of them are not muslims at all ( like turkey and iran that many of are atheist but are non as muslims! )
so no idiot it doesn't have any connection !

Religion certainly has something to do with GDP. That is clear.

Your response to me is evidence that you are an economic determinist. That is a discredited philosophy. Life is more complicated than that.

However, one thing that is consistent throughout human history is that ideas shape society.

The introduction of the idea that all are equal before the law changed the Earth.

The introduction of Islam into any area depletes productivity, finances, equality, etc. And, by the way, the depletion of the above attributes does depress the IQ of a nation. It would be hard to argue against that.

There is no doubt about it.

All of these things suppress individualism, creativity, thinking, innovation, and ultimately the ability to make money and live a decent life.

It is cruel to critize Islam. My current IQ is 134 and I am only 11 years old...........and I'm a muslim! It really doesn't matter what religon you have. It's probably because the country has poor education and expensive schools.....not the religon.

Hi Anonymous,
This article is not saying that Muslims are inherently stupid, but that Islam tends to discourage inquiry and because it does, gradually the spoils go, not to the intelligent, but to those most suited to Islam, which means the strong, evasive, and mean.

Because you are intelligent, you must see that Muslim countries are very backward. For instance, the entire Arab world only had a few hundred (200-300) patents in the 1990's. During the same period of time, South Korea had over 17,000 patents.

The problem here is about more than economics. The problem is, as I said, the discourage of inquiry.

When religious books are considered the be-all/end-all of knowledge, then people are not apt to study other topics. This leads to a lack of innovation.

I noted in my article Muslim IQ that Muslim IQ is not any higher even for Muslims who live in advanced countries like the Netherlands, so nutrition is not a factor in their abysmally low scores.

It is the Quran that makes Muslims dull.

It's the inbreeding that makes the muslims moronic. Inbreeding that has been going on for perhaps well over a thousand years, how many generations are that? In The Netherlands, over a THIRD of the Turks still marry a first cousin and for people stemming from North Africa the percentage might be even more. In Amsterdam alone, 80% of the children in schools for disabled or retarded are either Turkish or Moroccan or from other muslim countries. Our government officially prohibited cousin-marriage because of this, but it's still hard to control especially when they fetch a spouse or bride from their homeland.
It's not nutrition, for they're as obese as can be. And the koran? Though it certainly isn't enlightening, a silly book doesn't make one that stupid.

I love how everyone is denying that IQ is genetic. IQ IS genetic, and is heritable. If nutrition raised IQs, than blacks in America should be getting CEO jobs (not including Affirmative Action) yet they're not.

To that one Muslim who allegedly has an IQ of 134...prove it. Really.

If IQ was not genetic, than perhaps the Flynn Effect would be true. But it is, and the commentators don't know what they're talking about.

I'm quite sure there are Muslims in this world with a 134 IQ.

One person, or 100 people, who have high IQ's do not mitigate the overall truth that, Islam is destroying the heritable intelligence of it's people by it's support of consanguinous marriage (cousin marriage).

Well,not to be racist or anything but the Indians and the Chinese in Malaysia are the reason why this country's iq is high. The advantages the country has given to the Malays has made them lazy
I mean the school I go to is quite a good one and there are around 60 teachers there.45 are malay and none but 3 or 4 can speak proper English. All are Graduates!!!

There... Go ahead and be surprised if you will...

I think you are forgeting about "Madey", which is a Malay and Muslim.

Rasulullah SAW (Islam), never supports consanguinous marriage and he also teaches his followers to avoid it. If you're talking Islam supports such things, please make a double check and study the facts.

Anyways, too bad that such thing happens a lot in Islamic nations (mainly in "ex-India" nations) but Islam is not the cause, it's the "caste" concepts (visit India or watch Indian movies, you'll understand).

Talking about intelligence, do you know that gaining knowledge is an obligation and everyone rights in Islam? Education is a "must" thing for everyone in Islam.

So, man, it's obvious that your Islamophobia has drove you to do such accusations. Well, it's okay, no problem. It's not your fault. Have a good life, bro. Peace. ��

It cannot be the indians. The average IQ in India is 81 only. They will pull down the average.

Muhhammed married 2 of his cousins. Obviously he wasn't totally against the practice.

Having travelled extensively and having worked in muslim countries around the globe, I can state that I never found one muslim that could be described as intelligent. They are brainwashed into submitting to the koran and all other considerations are secondary. I hold a first class hons degree in science and on two occasions had my IQ tested resulting in assessments of 148 and 153 respectively. Check out the average IQ in muslim countries...Were it not for the unfortunate fact that Islam is considered(accepted) to be a religion then they would all be certifiable and declared insane

You can't believe what i just got,… A loan of $ 60,000. I have been looking for a loan for the past 2years until i was referred to a legitimate lender. Though it was not that easy to approve my loan, as you know nothing good comes easy. But I got my loan within 4 hours i got my loan, and before i knew it, the loan was transferred to me. please friends, don't let any body deceive you and scam you for this is real. Contact them via Email: gaincreditloan1@gmail.com OR You can also whatsApp them at: at +31-635-250-311 (WhatsApp Only)