After noticing a large number of hits coming to my blog via searches, all looking for "The Prophet Mohammed Anagram", I decided to do a bit more research. It seems as though a cartoon [Opus] which appeared on the Berkeley Breathed Website contained an anagram for 'The Prophet Mohammed', but it was scribbled out. Below is the original cartoon strip, including the scribbled anagram [click the picture for the full sized image]. So the challenge is for my fellow infidels to work out what it was. Good luck kaffirs ;) 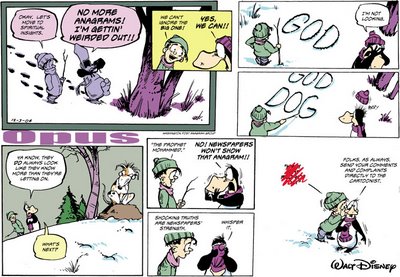 Anonymous,
You're a genius.

J, I think you ought to put

on the front page.

I'm sure that's the answer.

I don't know about the socalled prophet Mohammed. But if you join

Mohammed and the name of the Iranian president, Ahmadinejad, you get:

(sigh!) "Another Infidel to behead! So many Infidels! So many heads! If only the West had one head so I could chop it off with one fell swoop of my Arabian sword"

Another anagram for "The Prophet Mohammed"?

Very good, Kholari. thanks for that.

With the assistance of http://wordsmith.org/anagram/, I came up with--

Mohammad, the Muslim, came to the United States
from the Middle East.

He was only here a few months, when he
became very ill.

He went to doctor after doctor, but none of
them could help him.

Finally, he went to an Muslim doctor, who said,
"Take dees bocket, go into de odder room,
poop in de bocket, pee on de poop, and den
put your head down over de bocket, and
breathe in de fumes for twenty minutes."

Mohammad took the bucket, went into the other
room, pooped in the bucket, peed on the
poop, bent over, and breathed in the fumes
for thirty minutes.

Coming back to the doctor, he said, "It
worked! I feel terrific! What was wrong
with me?"

The doctor said, "You were homesick!"