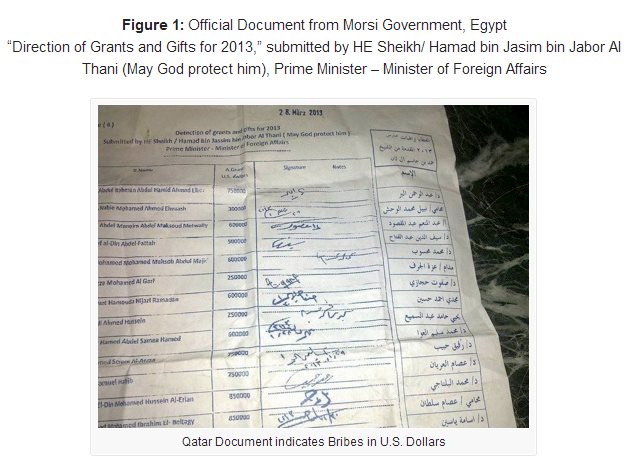 By Walid Shoebat
Egypt’s Attorney General Hisham Barakat is looking into evidence that arrested Muslim Brotherhood leaders accepted bribes from the U.S. Embassy in Cairo, according to a report from Almesryoon,an Egyptian newspaper that cites a “judicial source”.
The trials that are scheduled to begin in Cairo on August 25th will feature a litany of charges against the Egyptian Muslim Brotherhood. Included among them are murders, assassinations, prison escapes, sniping, indiscriminate killing of demonstrators, and collaborating with foreign governments, to include both the United States and Qatar.
Evidence we have obtained lends credibility to the charges of “gifts” (bribes) being taken in U.S. dollars from the U.S. Embassy in Cairo” that were distributed to top ministerial level officials in the Mursi government.
Via Almesryoon:

“A judicial source stated that over the past few days, a number of complaints have beenfiled with the Attorney General Hisham Barakat. These complaints accuse the leaders of the Muslim Brotherhood and leaders of the centrist party of receiving gifts from the American embassy in Cairo. The sponsors of these complaints stated that among these leaders are Mohamed Badie, General Guide of the Muslim Brotherhood, Khairat Al-Shater, deputy leader and businessman, Mohamed Beltagy leading the group, Essam el-Erian, deputy head of the Freedom and Justice Party of, and Abu Ela Mady, head of the Wasat Party, Essam Sultan, deputy head of the Wasat Party.”

Smoke and his elusive friend FIRE.

OMG! No wonder "they" are desperate to have the thugs released. They can already feel the elusive friend in their pants!

This has benghazi written all over it. There is now so much evidence out that shows our president to be dirty. But, I guarantee nothing will be done about it. Our government has grown so large it is no longer a government by the people for the people. We have no idea what our government is up to. We have no power to do anything about it. Letters and phone calls are a waste of time. How do we know that things won't get dangerous for us here while we sit around waiting for the next election? Oh well, we live in the US, we are immune to danger, nothing will happen to us. We have the freedom to vote. /sarc