Why do Russia and China CARE about Assad at all?

As we are (idiotically) moving towards a strike which will help Al Qaeda against Assad and his main helper, Ayatollah Khameinei (which reminds one of Jubal Early’s dictum on THOSE PEOPLE with regard to both sides) .. one has to wonder why Russia and China who seem well served MOST of the time by their amoral foreign policy actions, care about the situation in Syria.
IRAN.
Iran, the lace which has made Syria the lynchpin of its regional hegemony hopes.
Iran the place whose existence strategically threatens the allies of the USA and may one day threaten our entire worldwide actions and prerogatives.
Iran whose cat’s paws of Hezb’Allah, and the IRGC, and it’s Al Quds, freaks may turn up doing ANYTHING, ANYWHERE including attacks in the USA.
Iran, without whose existence as such a threat US plicy objectives would SEEM pre-eminent as a national force (but for the freakish salafis such as the MB, but that’s another story entirely).
So now we have China who also gets a ton of oil from Iran, and Russia, who also sells a respectable amount of hardware to Iran, warning us about attacking the key ally of an Iran who just warned us that if Syria was attacked, Israel would be the first victim.
Well, I BELIEVE IRAN. Assad is CRITICAL to them. They MUST act.
REGIONAL WAR. MINUS EGYPT (at a very key moment, neh?)
Which of course reminds me of something else for Barack Obama - 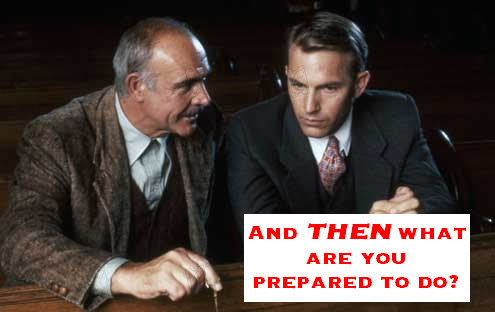 If Iran is serious, and we are prepared to do what it takes (anyone believe this of Mr. Obama?), all items can be cleared at once.

Does Obama really know what he is getting himself (and us) into?

I don't much care. There are no good options. The United States being made to look bad is, at this point, no worse than any other option.

I don't care about either side either. But looking bad isn't what i'm worried about.

Obama has already seriously tarnished our reputation, at this point things can't get a whole lot worse on that front.

What i'm worried about is the killing and destruction that Assad and his friends are capable of.

And there is always the threat of shit happening here on our soil. We all know that Iran has people here who are capable of causing some serious problems.

At this point, I tend to think that any action is better than no action.

As I've always said, the sooner we get this over, the less people will die.

It might/will not start out well, but the outcome is we win.

I don't think Obama is prepared to finish the job.

I don't think Iran will go to war on this, they will 'loose face' take their losses keep Hezbollah intact and concentrate on their Nuclear weapon goal.

Russia will back down if it gets ironclad guarantees on their gas & oil pipelines trough the Middle East and NO Terrorist attacks on Sochi games.

Obama would never finish the job and that would finish him.

Even after betraying itself through the election of Obama, I still don't think the American people are stupid enough to give up the ghost to Islam.

I agree with Will on this, by the way.

This is a wait and see situation. Just like everything that has happened in the ME, nobody knows what will happen.

The ME is a total mess, killing and blood literally everywhere.

There will be a tipping point, we just don't know when or where.

If it happened to be, then, I agree with you, Obama is NOT prepared to actually do anything and we will come out looking really stupid. ... for the time being.

If you look at Iran's military philosophy (er) .. the OTHER OTHER BAD GUY .. FROM 2006 right here:
" President George W. Bush is an "aberration," a leader out of sync with his nation's character and no more than a brief nightmare for those who oppose the creation of an "American Middle East." Messrs. Abbasi and Ahmadinejad have concluded that there will be no helicopter as long as George W. Bush is in the White House. But they believe that whoever succeeds him, Democrat or Republican, will revive the helicopter image to extricate the U.S. from a complex situation that few Americans appear to understand."

Iran WILL believe that if they attack Israel, just as in 1991, we will RESTRAIN Israel from creating a conflagration, in favor of america achieving its objectives.

CIVILIZATION LEVEL MISTAKES are how large wars happen, as well as small ones. Even Hassan Nasrallah said he had NO IDEA Israel would invade after he kidnapped IDF soldiers.

We in the USA have/had PUTIN 100% wrong at the leadership level. DO have CHINA 100% wrong. We do not understand Iran and it's goals AT ALL, and want to deal with them as if they are the AFL/CIO (which is how LBJ attempted to deal with Ho Chi Minh, btw).

So long as Iran regards Syria as indispensable (and they DEPLOYED the IRGC there) they WILL react, and WILL perceive as they do so, that at the least Russia and China will act in concert to thwart the USA.

Israel will NOT be restrained this time.

I hope Epa is right. But i think this time next week, we'll all be talking about Chandra Levy again.

Like I said, nobody knows what will happen. This is a wait and see game.

This chess match is not computerized. it is 2 old people sitting in the park, making their own decisions about the next move.

Dennis Prager was on the radio this morning saying we should attempt to ensure BOTH SIDES LOSE.

I tend to agree with Epa on Israel not to restrain...in case Iran would go in, but i don't think they'll go for it, if the had nuclear capability YES, but not now.
From whom they just nominated for the nuclear talks it's pretty obvious they'll go for the Israeli nuclear stockpile while quitly progressing towards nuclear breakout.

Iran keeps the other loonies in check, and it´s less of a threat than your so called "allies" the arab countries which are currently very busy taking over and colonizing yor countries and planning even more terrorist attacks. Russia is doing you a favor.