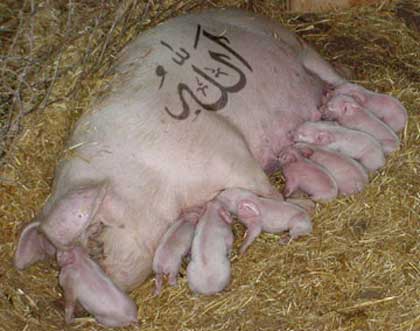 But, but, I thought they said Allah and the Judeo-Christian God were the same god.

Fuck Muslims and their fucking pig of a "god".


A Catholic weekly newspaper in Malaysia this week lost its latest legal battle over the right to use the word ‘Allah’ for God in its local language edition.
In a case that has sparked nationwide debate over which religion has exclusive rights to the word Allah, a three-member panel of the Court of Appeal ruled unanimously that the government’s efforts to ban the use of the word in Christian publications will continue. The next hearing is scheduled for September 10.

The Malay Mail explains why this edict is so crippling to Malaysian Christians.  The following are just a few examples,

However, more than 60 per cent of Malaysian Christians only speak Bahasa Malaysia, and the word used for God in the Bahasa Malaysia Bible (Al-Kitab) since its translation in 1731, is ‘Allah’. …
… from the very beginning, the word ‘Allah’ has been used in the liturgy, prayers and worship of those Christians who speak Bahasa Malaysia.  But for centuries, there has been no opposition or uproar about their use of ‘Allah’.
As stated earlier, the word ‘Allah’ pre-dates Islam. It is not a creation of the Muslims and its existence does not begin in the Al-Quran. …
In the Malay language, ‘Allah’ means ‘God’ and Tuhan means ‘Lord’. As is obvious when we read the Bible, both God and Lord are used in the Bible, and both have different connotations. Therefore ‘Allah’ cannot be substituted by ‘Tuhan’. … The word Tuhan has been applied to Jesus Christ and read as Tuhan Yesus.
If Christians are to substitute the word ‘Allah’ for Tuhan, it will render many Biblical references to God and Jesus incoherent. …
• Bahasa Malaysia-speaking Christians will not be able to affirm the deity of Jesus Christ and teach the doctrine of the Trinity as these two foundational words are essential to maintain and communicate these truths.

Christians should use the name of God as described in the Bible.

In an admittedly weak Hadith, Ayisha was quoted as saying Mohammed's dick tasted like bacon.

The Malaysians are quite right In Arabic illah is God, remember the shahida, there is no illah but allah. In other words, allah is their particular god in their pantheon. Of course screaming out allah for 1300 years has put his name at the forefront of all gods. In other news, gulf of Mexico manatees have been dying in record numbers over the last few years because of the extreme cold in the Gulf. Must be more global warming.

I didn't know that. How have I missed that bit of knowledge all these years?

Where did you learn that, Ciccio?

There's no one iller than Allah.

Not only that, every Tuesday Christians must wear their underwear on the outside, on Saturday, all 5 Jews in Maylaysia must do the hora in Penang's tower plaza for 30 minutes while carrying the Torah (they're HEAVY, dudes).