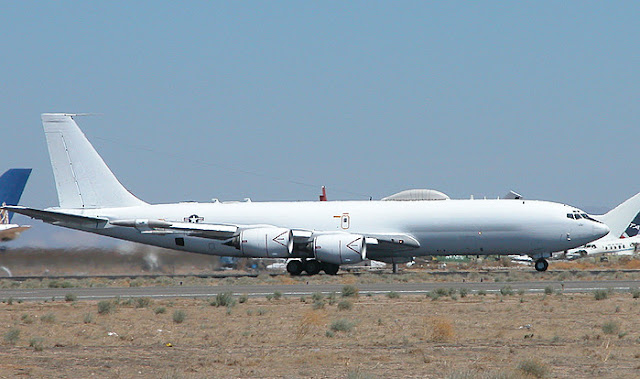 This non-descript plane could be key to U.S. war against Assad — and a warning when strikes are imminent

There might be the way to spot a Syria strike before it happens — by tracking the location of the Navy’s command and control planes using the Internet.
Meet the E-6 Mercury. The 150-foot-long aircraft, which resembles a Boeing 707 painted porcelain white, is one of the most important aircraft used by the U.S. military. The 16 E-6s in service not only serve as command and control centers for the Pentagon’s strategic nuclear forces, but there’s also a good chance the birds may be used in a Syria war: relaying orders to cruise-missile submarines and destroyers in the Mediterranean while acting as flying command stations for long-range bomber strikes launched from around the world.
The E-6, curiously enough, also carries automatic dependent surveillance-broadcast technology, or ADS-B, making it one of the few military planes to broadcast its signal over public radio channels. This means you can track the planes while they’re in the air.
Go to any number of free air traffic mapping services, likeFlightRadar24, and watch them buzz around live. Hint: Search for active planes, hit CTRL-F or Command-F and type the callsign “GOTO FMS.” Watch them now, and you might see E-6s patrolling above North America. (You might also have to try searching Planefinder.net.)
GO READ THE REST.
Posted by Pastorius at 7:44:00 pm

Hmmm....I think the White house leaks already enough info to the enemy, no need to help them.