Obama and Terrorists – or is it Obama and the Sunni Muslims? 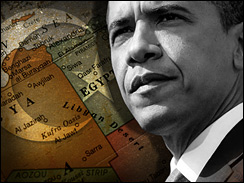 In a great article in the Independent, Robert Frisk points out that if Obama attacks Syrian leader Assad’s army, the US and Al Qaeda would be on the same side.  However, Frisk incorrectly states that this would be the first time.  Not so.  As Gateway Pundit pointed out in prior posts, Obama was on the same side as Al Qaeda in Libya when bombing Gaddafi and his forces.  Obama, also, sided with the terrorist organization, the Muslim Brotherhood, in Egypt, even providing them with $1.5 billion in aid, and then taking it away after they were overthrown.
Pundits have tried to figure out Obama’s motives.  Some say Obama is driven by anti -colonialism like his father.  Obama’s anti-colonialism makes sense, but doesn’t address all of Obama’s motives in the Middle East, or necessarily his attacks against Christians and Jews.  Others say that Obama is on the side of Islamists, which doesn’t address his siding with one Islamist group (Al Qaeda) over another Islamist group, or Islamist group wannabe like Assad.  What does make sense is Obama’s policy of always siding with the Muslim Sunni sect.
CLICK ON THE TITLE ABOVE TO READ THE WHOLE THING.
Posted by Pastorius at 1:25:00 pm

What does make sense is Obama’s policy of always siding with the Muslim Sunni sect.

Pasto, I know you didn't write this so not criticizing you :P.

A couple of months ago someone said all evidence pointed to Obama being a Shiite. This sh*t makes my head spin.

Obama’s anti-colonialism makes sense, but doesn’t address all of Obama’s motives in the Middle East, or necessarily his attacks against Christians and Jews.

Really? Who the f*** write this sh*t? His anti-colonial stance as understood from his father's perspective (who was a Muslim) and his upbringing in Muslim environment would squarely blame the Jews and Christians on devising this evil imperialistic plan on the innocent Muslims of the world.

As the Quran puts it:

"O you who have believed, do not take the Jews and the Christians as allies. They are allies of one another. And whoever is an ally to them among you - then indeed, he is of them. Indeed, Allah guides not the wrongdoing people." Sura 5:51

Not saying Obama is Muslim. However, seeing that he is anti capitalist and anti everything America stands for (at its core) including the Judeo-Christian traditions, it would make perfect sense in his stupid anti colonial stance, he'd let the Christians and Jews die and pay for the sins of their fathers.

I haven't watched his documentary but from what I've heard from several interviews, I think D'Souza seems to get the mentality of Obama.