THE SIMPLE TRUTH ABOUT MAN-MADE CLIMATE CHANGE AKA: IRRITABLE CLIMATE SYNDROME OR "WEATHER, NOW WITH TAXES" 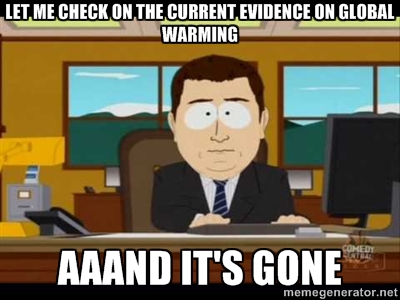 MAN-MADE CO2 CAUSES SUMMERS TO BE WARMER/COOLER/WETTER/DRIER.
AND IT CAUSES WINTERS TO BE COLDER/WARMER/SNOWIER/DRYER.
GOT THAT?
(HAT TIP CNBC'S JOE KERNEN)

Or as I like to call this Climate nonsense "The Global War on Weather", that brings to mind an image of bunch of Leftist Eco-Mentalists together with sell-out Scientists and Politicians riding their high horses to the nearest hill and pathetically shooting arrows into the sky.

I have a theory, follow me down the vaults of history to check it out. Remember flying? In 1953 I flew to South Africa from Europe, it took three overnight stops. It was a luxury for the very rich, took about six months average wages. Flew again in 1963, only took 28 hours, three stops for refueling but still cost more than a month's pay. And then came the 70's and the new Boeing 707.Everybody could afford to fly, even a plumber or carpenter could fly to Europe of Africa for a vacation. I mention those two only because todaythe economist is looking for a job and the mathematician has forgotten what a job is like but those two can still afford to fly. And all over the world those dusty landing strips outside of town became miles of paved runways, acres of parking lots, small towns in itself often with more traffic and congestion than in the town itself.For a start all airports were located as far from the woods as possible, trees in the vicinity were chopped down with ruthless abandon. Every airport was turned into a little town with no green, more heat absorbing black then anywhere else and one other thing that every airport in the word has and has always had before even the first runway was built.. A weather station that records the daily temp ect and of course carbon monitors. I do not know what it's like in the rest of the world, in Canada half the weather monitoring stations that prepare the world climate reports are at airports.

Good point, Ciccio. I think there is something to that.