Game Over: Danish Imam Defects, Declaring, "The truth is that there is not a single mosque or Muslim organization in Denmark that is not run by Islamists" 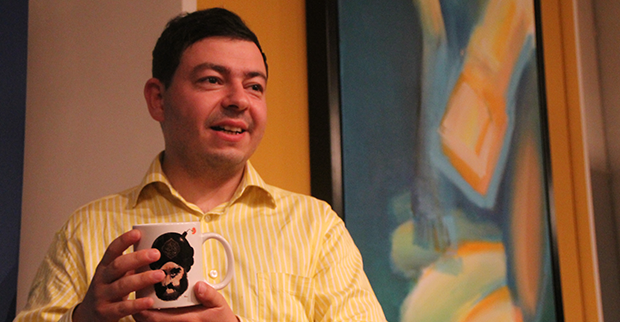 But, of course, people in all the other Western nations will go on telling themselves that their country is different, that somehow, the Muslims in their country are NICE MUSLIMS,

A tiny man with more than a hundred deaths and the burning of two Danish embassies on his conscience. –

Thank you for inviting me. I don’t know if I deserve all this, but perhaps my journey through life may be of use to you, says Ahmed Akkari as he timidly surveys the packed hall in the heart of Copenhagen.

Since ex-Islamist Ahmed Akkari came out of the closet three weeks ago, he has been the man of the hour. On television shows, in newspaper articles and on radio, he has tried to explain what has happened to him.

He went from being a hardened and fierce Islamicist to a kindly and thoughtful person, filled with love and gratitude for Denmark. The metamorphosis is difficult to explain and hard to believe.

Is his conversion sincere or he is he applying taqqiya – the right of Muslims to lie and deceive in the service of Islam?

In 1985, when Akkari was six, his parents fled to Denmark from war-torn Lebanon.

They chose Denmark because it was a safe country without too many immigrants – thinking that they would find a peaceful life here. Ahmed Akkari attended public school as the only immigrant in his class.

He had every chance in the world to adapt and become a normal Dane. But in his teens he was drawn to religious circles and before realizing what was happening, he had become poisoned by extremism. –

The truth is that there is not a single mosque or Muslim organization in Denmark that is not run by Islamists. As soon as you enter the house of the believers, you are met with Islamism whether you want it or not. As soon as you become a devoted Muslim, you are infected by extremism, says Ahmed Akkari.

he should be tried and put behind bars for the rest of his pathetic life as minimum, death sentence would be preferable, not given warm receptions, he's admitted he incited hundreds of murders and arson against embassies, he should be behind bars, instead, he's giving conferences, how quaint.. WOULD YOU EVER FUCKING WAKE UP!?!?!?!

What are you angry at me for?

Really? So all those Soviet spies that defected and got asylum in the US should have been tried as well? What kinda screwed up thinking is this? And when are the conservatives going to realize you can't defeat Islam if you don't welcome those who defect.

This whole BS of "let's unite and fight Islam" is going to go nowhere if you get no inside information.

The only thing I would say is that he should be vetted before he's welcomed. This guy wakes up one day and decides he was wrong and wants to mend his ways but doesn't seem to have left Islam? I have a hard time buying that.

But if you start prosecuting everyone who leaves Islam then might as well execute them because Muslims are going to do the exact same thing anyway.

Use the information, instead, from ex Muslims and clamp down on these Muslims.

That guys comment was cryptic and angry which often means, RETARDED.

I totally agree with you Nico. If this guy is on the up and up, then we need him and his information.

I completely believe him -- in fact, I'm not surprised that this could happen. I think that the kind of mental state that people get into when they become extreme Islamists is a kind of psychological corner that people back themselves into, and that it's possible (for some people who are lucky and maybe also brave) to come out of that corner very quickly. I went through a period of being fanatical about my religion (not Islam and not one that encourages slaughtering infidels) for a while and so I know something about how quickly a person can snap out of that kind of trance, if conditions are right. I pray for this man's well-being and safety and continued growth. And perhaps he will help to find ways to reach other Islamists who have a capacity to come out of it. -- Bradamante

There was this guy named Saul of Tarsus who was also on the wrong side, the problem was at heart he really was a decent man. This guy is probably doing the same thing.