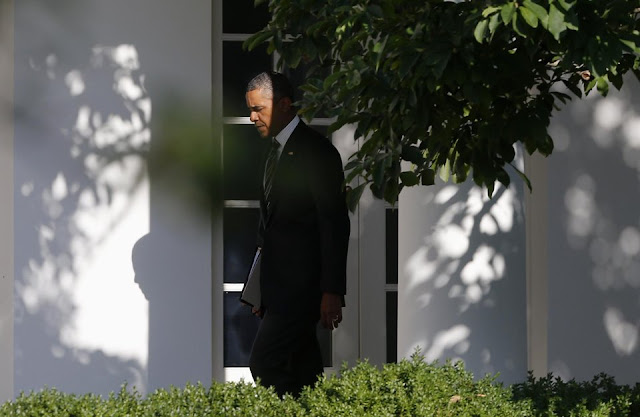 As per usual with the AP and international news analysis in general, this is a lot of fluff, but it is worth reading, because it is an attempt to sum up where we are now.

Of course, Mark Steyn and Charles Krauthammer would do a better job. But, this article is important as it stands as a testament to a Leftist media coming to grips with the failure of a President, and policies, they backed with their heart, mind, soul, and vulva.


WASHINGTON (AP) — Nearly five years into his presidency, Barack Obama confronts a world far different from what he envisioned when he first took office. U.S. influence is declining in the Middle East as violence and instability rock Arab countries. An ambitious attempt to reset U.S. relations with Russia faltered and failed.

Even in Obama-friendly Europe, there's deep skepticism about Washington's government surveillance programs. In some cases, the current climate has been driven by factors outside the White House's control.

But missteps by the president also are to blame, say foreign policy analysts, including some who worked for the Obama administration.

Among them: miscalculating the fallout from the Arab Spring uprisings, publicly setting unrealistic expectations for improved ties with Russia and a reactive decision-making process that can leave the White House appearing to veer from crisis to crisis without a broader strategy.

Rosa Brooks, a former Defense Department official who left the administration in 2011, said that while the shrinking U.S. leverage overseas predates the current president, "Obama has sometimes equated 'we have no leverage' with 'there's no point to really doing anything'."

Obama, faced most urgently with escalating crises in Egypt and Syria, has defended his measured approach, saying America's ability to solve the world's problems on its own has been "overstated."

"Sometimes what we've seen is that folks will call for immediate action, jumping into stuff, that does not turn out well, gets us mired in very difficult situations," he said. "We have to think through strategically what's going to be in our long-term national interests."

The strongest challenge to Obama's philosophy on intervention has come from the deepening tumult in the Middle East and North Africa. The president saw great promise in the region when he first took office and pledged "a new beginning" with the Arab world when he traveled to Cairo in 2009. But the democracy protests that spread across the region quickly scrambled Obama's efforts.

In Syria, where more than 100,000 people have been killed during the two-and-a-half year civil war, Obama's pledges that President Bashar Assad will be held accountable have failed to push the Syrian leader from office. And despite warning that Assad's use of chemical weapons would cross a "red line" in Syria, there was scant American retaliation when he did use the toxic gases.

On Sunday senior administration official said there is "very little doubt" that a chemical weapon was used by the Syrian regime against civilians in an incident that killed at least a hundred people last week. The official spoke on condition of anonymity because the official was not authorized to speak publicly.

Few foreign policy experts predicted the Arab uprisings, and it's unlikely the U.S. could have — or should have — done anything to prevent the protests. But analysts say Obama misjudged the movements' next stages, including Assad's ability to cling to power and the strength of Islamist political parties in Egypt.

"The president has not had a long-term strategic vision," said Vali Nasr, who advised the Obama administration on foreign policy in the first term and now serves as dean of the Johns Hopkins School of Advanced International Studies. "They're moving issue to issue and reacting as situations come up."

Obama advisers say the president is frustrated by what is seen as a lack of good options for dealing with Arab unrest. But the president himself has pushed back at the notion that the U.S. has lost credibility on the world stage because he hasn't acted more forcefully. "We remain the one indispensable nation," Obama said in a CNN interview aired Friday.

"There's a reason why, when you listen to what's happened around Egypt and Syria, that everybody asks what the U.S. is doing. It's because the United States continues to be the one country that people expect can do more than just simply protect their borders."

But the perception of a president lacking in international influence extends beyond the Arab world, particularly to Russia. Since reassuming the presidency last year, Vladimir Putin has blocked U.S. efforts to seek action against Syria at the United Nations and has balked at Obama's efforts to seek new agreements on arms control.

Putin's hard-line approach stands in stark contrast to the relationship Obama cultivated in his first term with Putin's predecessor, Dmitri Medvedev. The two held friendly meetings in Moscow and Washington (Obama even took Medvedev out to lunch at a local burger joint) and achieved policy breakthroughs. They inked a new nuclear reduction agreement, and Moscow agreed to open up supply lines to help the U.S. pull troops and equipment out of Afghanistan.

Michael O'Hanlon, a national security analyst at The Brookings Institution, said the president miscalculated in assuming that a few signs of improved ties would be enough to overcome years of distrust with the Russians. "The issue here is one of raised expectations, unrealistically high expectations that Obama himself deliberately stoked," O'Hanlon said. "He hoped that a more pragmatic, disciplined, less interventionist foreign policy would appease the Russians."

The White House's ties with Russia were further damaged this summer when Moscow granted temporary asylum to Edward Snowden, the former government contractor accused of leaking documents detailing secret U.S. surveillance programs. In retaliation, Obama canceled plans to meet with Putin in Moscow next month, though he will still attend the meeting of leading rich and developing nations in St. Petersburg, Russia. But the international impact from the National Security Agency revelations has spread beyond Russia.

In European capitals, where Obama's 2008 election was greeted with cheers, some leaders have publicly criticized the surveillance programs. Among them was German Chancellor Angela Merkel, who questioned the legitimacy of the programs while standing alongside Obama during his visit to Berlin earlier this year.

Obama has long enjoyed high approval ratings from the European public, though those numbers have slipped in his second term. So has European approval for his administration's international policies.

A Pew Research Center poll conducted this spring, before the NSA programs were revealed, showed that support for Obama's international policies was down in most of the countries surveyed, including a 14 point drop in Britain and a 12 point drop in France.

Appears he is getting ready to bomb Syria. http://www.nytimes.com/2013/08/26/world/middleeast/syria-says-un-will-get-access-to-site-of-possible-chemical-attack.html?pagewanted=all&_r=0

YOu notice, I don't even bother posting on that subject. It doesn't matter if we act, or don't act.

It's gonna come out like shit, and the whole world will blame us for it no matter what.