Putin will attack Saudi Arabia if the West attacks Syria? 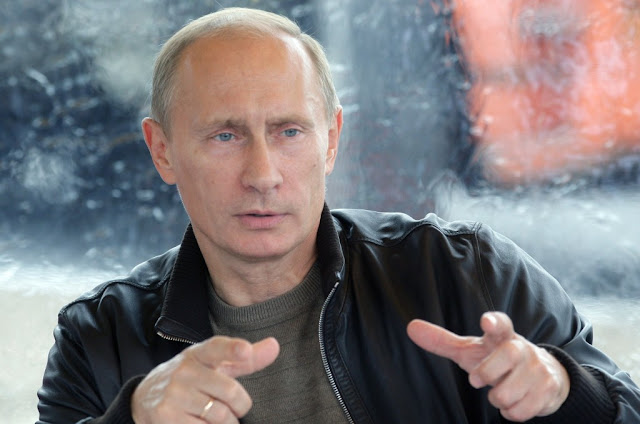 Hey, I got an idea, let's start a World War. You with me? Alright, awesome.

From CyberWarZone (which appears to be a website loosely affiliated with Anonymous):

A grim “urgent action memorandum” issued today from theoffice of President Putin to the Armed Forces of the Russian Federation is ordering a “massive military strike” against Saudi Arabia in the event that the West attacks Syria.

According to Kremlin sources familiar with this extraordinary “war order,” Putin became “enraged” after his early August meeting with Saudi Prince Bandar bin Sultan who warned that if Russia did not accept the defeat of Syria, Saudi Arabia would unleash Chechen terrorists under their control to cause mass death and chaos during the Winter Olympicsscheduled to be held 7-23 February 2014 in Sochi, Russia.

If this happens, Infidel Bloggers Alliance is fully prepared to NUKE PUTIN!

Hehe. Putin is a hot headed POS who used to head the FSB. Not a very good idea to threaten him with unleashing "Chechen terrorists".

Saudis may be rich but intelligence and common sense hasn't been introduced to these brutes. Just because the West bows down to their idiotic threats doesn't mean Russia would too.

Saudi Arabia is poking the bear here. They need to calm the f*** down.

And on that note, the West needs to calm the f*** down as well. Everyone here is playing with fire.

Leave Syrians alone and let Assad kill off the rebels.

Get involved with Syria and risk a war that engulfs all of ME and threatens oil supply and sends prices skyrocketing, hurting not only the ME but also the fragile US economy.

Israel has so much to worry about with not being able to count on the US anymore. I hope to God the Obama admin is only barking and will not take any action.

The outcome of this bears watching that's for sure.

Filling our gas tank. Think it might be a good idea.

If the West gets involved in Syria, this isn't going to be like Libya. This sh*t's going to be drawn out. No one gave two sh*ts about Libya.

Russians and Iranians have invested heavily in Syria over the years.

I see direct Russian involvement as highly unlikely but that does not mean Syria won't receive any support.

If the West attacks Syria then get ready to have high gas prices for a very long time, especially since Obama keeps delaying the Keystone pipeline...its as if he WANTS Americans to suffer under high gas prices...

This clip has lain buried for three and a half months, with only 1,600 views. I can’t see the Beeb giving it any more publicity now. I wonder what it would take to make it go viral…

Carla Del Ponte, the former ICTY prosecutor, gave an interview to the BBC in which she talked about the possible use of nerve gas by the Syrian “rebels”. Below is footage excerpted from that interview.

via gates of vienna

Um, the original "story" comes from a website called What Does It Mean by Sorcha Faal.

There may be a hint of truth there but, loosely stated, I would trust Alex Jones sooner than Sorcha Faal.

All the stories from What Does It Mean start with either that sentence or some iteration of it.

They are extreme these are the End Days Globalist conspiracy the Illuminati will get you freaks.

Do I have to make it more obvious next time?

Oh I saw it. Was waiting for Epa to comment. :)

If Putin nukes Mecca, Epa and I will consider not nuking Putin.

Obama turned down Syria's request to keep the inspectors there longer. He said is was a stalling tactic to prevent the bombing.

Although officials gave no indication of when a U.S. attack might occur, they said they expect U.N. inspectors to leave Syria on Saturday.