What a fracking nightmare this cunt is. 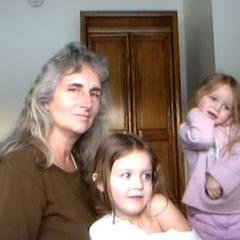 Obama supporter and prominent anti-fracking loon, Vera Scroggins is also a public advocate for parental pedophilia.  Scroggins made comments on a Yahoo group called “Peacelist“, a group that is “dedicated to the advancement of the human species by restoring its natural peacefulness, through the means of affectionate parenting and sexual freedom”.
Washington Free Beacon reported:

Vera Scroggins, an outspoken anti-hydraulic fracturing activist from Pennsylvania and a director of Citizens for Clean Water, made the remarks in emails to a Yahoo group in 2001.
“Are there cultures that mothers or fathers pleasure their children and teenagers sexually or genitally and also possibly initiate them into sexual expression at some point?” Scroggins asked in one message.
“I have had intuitive thoughts that such would be a healthy way for parents to interact with their children and introduce their children to sensual/sexual pleasure and bonding and loving practices,” Scroggins said.
“Who better to do it, than the parents first?” she added.
Scroggins posted those and other controversial comments on sexuality in a Yahoo group called “Peacelist.”
The group says it is “dedicated to the advancement of the human species by restoring its natural peacefulness, through the means of affectionate parenting and sexual freedom.”
It was moderated by German author and deputy director of the Wikimedia Foundation Erik Möller, who advocated “the importance of ‘Mothering’ and of youth affectional sexual relationships for peaceful and loving behaviors.”

In 2008 Erik Moller publicly defended pedophilia and wrote a book called “Children Are Pornography”.  Moller cites Greek history to defend his support of pedophilia and was caught removing child pornography pictures from his website.
To add to the creepiness of this story, Scroggins is a publicly devoted grandmother and  Pennsylvania libs refer to her as the “Grandmother Superhero“.

I think she is the perfect poster girl for leftism, I think at this point it should be obvious leftism destroys everything it touches, society, tradition, families, children, liberty, you name it if it is at all an original traditional value they find a way to pervert and destroy it

Alas, I must once again bow down to such a righteous, caring God that inspired the Apostle Paul to pen the first chapter of Romans. That Spirit which is omnipresent in both time and space has given us the knowledge which we wouldn't attain by our own wisdom, to be precise, what I mean to convey, just EXACTLY how right and wrong, the reprobate mind, and the enemies of both man and God are manifested. If you are confused by these words, then read what that Spirit has shown both you and I. Read and meditate on that ageless truth revealed in the first chapter of Romans inspired by That Most Holy Spirit.

18 The wrath of God is being revealed from heaven against all the godlessness and wickedness of people, who suppress the truth by their wickedness, 19 since what may be known about God is plain to them, because God has made it plain to them. 20 For since the creation of the world God’s invisible qualities—his eternal power and divine nature—have been clearly seen, being understood from what has been made, so that people are without excuse.

21 For although they knew God, they neither glorified him as God nor gave thanks to him, but their thinking became futile and their foolish hearts were darkened. 22 Although they claimed to be wise, they became fools 23 and exchanged the glory of the immortal God for images made to look like a mortal human being and birds and animals and reptiles.

24 Therefore God gave them over in the sinful desires of their hearts to sexual impurity for the degrading of their bodies with one another. 25 They exchanged the truth about God for a lie, and worshiped and served created things rather than the Creator—who is forever praised. Amen.

26 Because of this, God gave them over to shameful lusts. Even their women exchanged natural sexual relations for unnatural ones. 27 In the same way the men also abandoned natural relations with women and were inflamed with lust for one another. Men committed shameful acts with other men, and received in themselves the due penalty for their error.

28 Furthermore, just as they did not think it worthwhile to retain the knowledge of God, so God gave them over to a depraved mind, so that they do what ought not to be done. 29 They have become filled with every kind of wickedness, evil, greed and depravity. They are full of envy, murder, strife, deceit and malice. They are gossips, 30 slanderers, God-haters, insolent, arrogant and boastful; they invent ways of doing evil; they disobey their parents; 31 they have no understanding, no fidelity, no love, no mercy. 32 Although they know God’s righteous decree that those who do such things deserve death, they not only continue to do these very things but also approve of those who practice them.

Peaceful early man was a myth from the French philosopher Rousseux whoever you spell it and has been thoroughly debunked since it was first proposed. Early man was a savage fighting tooth and claw.