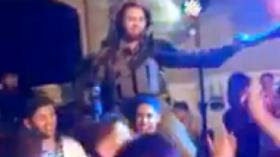 An image taken from an amateur video shows an Israeli soldier dancing atop a Palestinian man's shoulders to the song "Gangnam Style." The soldier and his colleagues have been suspended.

A group of Israeli soldiers who diverted their patrol into a dancehall earlier this week are facing their bosses' displeasure, after video captured the men — armed, wearing helmets and other gear — dancing with dozens of Palestinians in a club in Hebron. They were drawn into the building by hearing "Gangnam Style," the iconic dance hit song by South Korean rapper Psy.
A video of the event shows that at least twice, a soldier is hoisted on the partygoers' shoulders, drawing cheers from the crowd. In one sequence, he clasps hands with a man dancing next to him — who's also on someone's shoulders — all while keeping his assault rifle, a Tavor TAR-21, in his other hand. A video posted to YouTube says the Palestinians were celebrating a wedding.
As the video shows, dozens of young men cheered and held cameras and phones aloft, trying to capture the unlikely moment. We also note that the soldiers seem to have avoided the misstep of handing their weapons to others so they could dance.
In what could be called a rejection of "Gangnam Style" diplomacy, the Israeli Defense Forces has suspended the soldiers from duty in the elite Givati Brigade as it investigates.
Israel's Channel 2 TV, which first reported the incident, "said that the club was frequented by members of a Palestinian clan known for its pro-Hamas tendencies," according to Jerusalem Post.
"The Israeli military said on Thursday that it considers the incident serious, adding 'the soldiers exposed themselves to unnecessary danger and were disciplined accordingly,' without elaborating, The Guardian reports.

Suspended?
That's the most hopeful sign I've seen in 13 years

If things went south, how successful would they have been in defending themselves?

I agree with this:

"The Israeli military said on Thursday that it considers the incident serious, adding 'the soldiers exposed themselves to unnecessary danger and were disciplined accordingly."

No difference between these soldiers and head-in-the-sand politicians who think Muslims, especially those linked with the likes of Hamas, are harmless.

PS: Gangnam style is a f***in atrocity, I would have suspended them just for doing the dance.

PSS: Finally found myself disagreeing with Epa on something!

Christine were the 'Palestinians' in question not Druze at a wedding party?

Will - I take it the Druze wedding was just a rumor.

Thanks for the additional info Christine. :)

By the way just posted vid of chemical attack in Syria.

Thanks for that, Will.

You're welcome. Thanks for the video. :)

lottsa dancing but not a vagina in sight. these palis r just a bunch of turdburglars and camelhumpers

As is typical over there, the women were in a different room.

Muslim men are into "Allahholes" where they go in a bathroom stall and a penis magically appears through the wall.