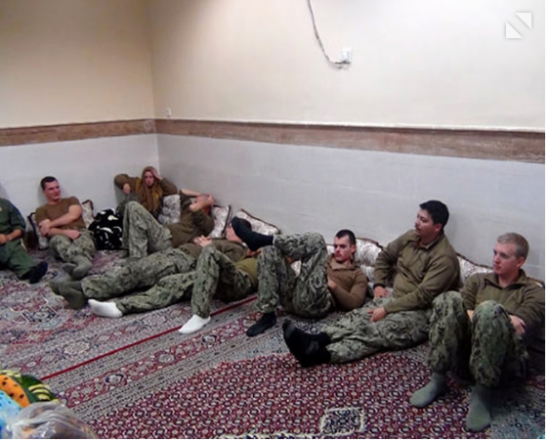 Submission, American-Style @ GatesofVienna.net
go read the whole thing. The timing of the State of the Union, Iran deal, and this seizure of naval assets and sailors by the Iranian guard is no coincidence. The video-tapes and global broadcasting of this seizure/capitulation is part and parcel fulfilling the dhimmi contract terms...

"According to Ibn Taymiyya, as a part of the fay, the jizya was
a restitution of an “inheritance”, of which the Muslim “was deprived”
because it had been unlawfully held by infidels. Through victory in
warfare Allah has “restored” these resources to benefit the Muslim
community and thus the service of Allah"

For the dhimmi, the annual jizya payment was a powerful and public symbolic expression of the jihad-dhimmitude nexus, which fixed the horizon of the dhimmi’s world. Although the ritual varied in its specific features, its essential character was an enactment of a beheading, in which one of the
recurrent features was a blow to the neck of the dhimmi, at the very point when he makes his payment.

“According to Ibn ‘Abbas, the dhimmi is struck on the neck (with the hand) when the tribute is collected from him....”[15]

A detailed 15th-century description of this ritual is provided by the Moroccan jurist al-Maghili (d. 1504):

“On the day of payment they [the dhimmis] shall be assembled in a public place like the suq.
They should be standing there waiting in the lowest and dirtiest place.
The acting officials representing the Law shall be placed above them
and shall adopt a threatening attitude so that it seems to them, as well
as to the others, that our object is to degrade them by pretending to
take their possessions. They will realise that we are doing them a
favour (again) in accepting from them the jizya and letting them
(thus) go free. They then shall be dragged one by one (to the officer
responsible) for the exacting of payment. When paying, the dhimmi
will receive a blow and will be thrown aside so that he will think that
he has escaped the sword through this (insult). This is the way that
the friends of the Lord [sayyid: Muhammad], of the first and last
generations will act toward their infidel enemies, for might belongs to
Allah, to His Prophet, and to the believers.”[16]
Historical sources from the 19th century — four centuries after
al-Maghili — show that this ritual of defeat continued to be practiced
in Morocco right up to the beginning of the modern era. James Riley, an
American captain, who was shipwrecked off the coast of North Africa,
captured and enslaved, and escaped to tell the tale, described a jizya ceremony which took place at Mogodore in 1815. He relates how each Jew, on paying the jizya, was struck a “smart blow” to the head.