Beslan Victims Angry At Government: AP Article Unclear On Why 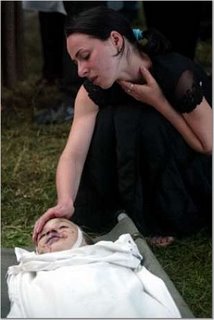 This is a mystifying article, if you ask me. Read the whole thing and you will find no reference to Islam, Islamofascism, or Muslims, even though Jihad against the Infidels was, clearly, the reason that the terrorists stormed the school and killed 331 people, mostly children.

Here is an excerpt:


BESLAN, Russia - Beslan's new School No. 8 boasts an Olympic pool, a computer room, dance studio and language lab, all paid for by the government. Tennis courts have gone up at the entrance of town, and a health club is being built.

Moscow has been pouring money and gifts into this poor town since the 2004 school hostage-taking tragedy that killed 331. But the largesse hasn't conquered feelings that the government shares blame for the bloodshed — and many feel the Kremlin is trying to buy their silence.

"The authorities understand they are guilty, so money and aid are just raining down on Beslan," said Elvira Tuayeva, 44, whose 12-year-old daughter and 11-year-old son were killed when troops stormed Beslan's School No. 1 to end a standoff with separatist militants.

"It's painful for me to see what's showing up in Beslan because I think it has all been bought with my children's blood," she said, still wearing mourning black 20 months after the tragedy.

Former hostage Kostya Marusich recounts how he drank urine to try to slake his thirst. He has undergone psychological rehabilitation in Canada and Germany, but all those efforts seem to evaporate as he obsessively revisits the ruins of the school, looking glassy-eyed at photographs of the victims hanging on the walls.

His best friends were killed before his eyes in the explosions that ended the three-day crisis, and one of the blasts blew him out of the building.

"I'm tortured by the question of who organized these explosions and why my friends died," the 16-year-old said, his eyes filled with terror.

Doctors have asked him not to wander in the ruins, urging him to play sports on the town's new field or take computer classes at the new school instead.

But he says: "I won't calm down and can't sleep soundly until I know the truth."


Could it be possible that this guy doesn't know who did this, and why? I don't believe it, but AP thinks we'll believe it.

Somehow, someway, AP and the rest of the Mainstream Media are determined that we will forget what happened at Beslan.

I will never forget. As far as I am concerned the Beslan Massacre was, in some ways, worse than 9/11, because the Islamofascists purposely targeted children.
Posted by Pastorius at 1:44:00 am

There are damn fools all over this country who are convinced the Bush Administration carried out the 9/11 attacks. Some geezer in our town keeps writing letters to the editor about it. This is one of the terrible dangers of not clearly identifying the enemy, and it is compounded when it is an enemy many are afraid to name because it is "politically incorrect" to do so. Could it be that the Russian government has somehow managed to conceal the real nature of the Beslan terrorists from their victims?

You know, it could be. Or, it could be that this guy is a conspiracy theorist. Or, he might have been making a more complex point, which AP didn't want to publish.

I suspect the guy in the article was saying something along the lines of, "This was too big and organized to have been done just by these guys. There must be a larger terrorist organization behind it. The government needs to find out who those people are and get them."

See what I mean?