Marcello Pera on Europe and War 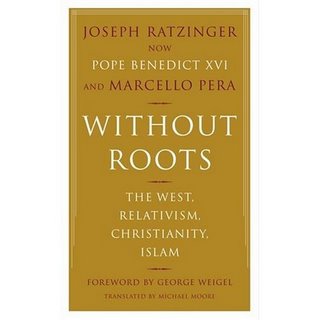 I am reposting this rather long quote from the book Without Roots : The West, Relativism, Christianity, Islam, a collection of letters on the title subject between Italian Philosopher Marcello Pera (quoted below) and Cardinal Joseph Ratzinger, now Pope Benedict XVI. Fabulous book, with this quote being part of a section I found appropriate to add to my analysis of Mahmoud Ahmadinejad's infamous Der Spiegel interview:

"So why should Europe reject the very fact of war? Why should the same Church that once launched crusades refuse to see a war that has been declared against "Jews and crusaders," as Islamic terrorists say every day? Do the Church and Europe realize that their very existence is at stake, their civilization has been targeted, their culture is under attack? Do they understand that what they are being called on to defend is their own identity? Through culture, education, diplomatic negotiations, political relations, economic exchange, dialogue, preaching, but also if necessary, through force?

I fear that Europe has not realized this. And thus I fear that European pacifism, however noble and generous it may be, is not so much a realistic, meditated, conscious choice as a heedless, passive consequence of its angelic relativism. This is why I speak of the spirit of Munich, which has an additional irritant today. Namely, that relativism, after teaching that all cultures and all civilizations are equal, makes the contradictory insinuation that our culture and our civilization are worse than others. Hence, there has been a spread-especially throughout Europe-of a sense of guilt, of self-flagellation, of a need for forgiveness from which not even the Church is exempt, together with a smugness of the dangers avoided. The September 11 atrocity? Blame it on our own genocidal acts, says Chomsky. Suicide bombs? Our fault: We have reduced the Palestinians to desperation, says Saramago. And so on, accompanied by a crescendo of breast-beating. How can we restore realism to a Europe that thinks along such lines?"

He has his finger on the problems at hand as accurately as does Ahmadinejad. The trouble is that Ahmadinejad has the missiles, the nuclear program, a whole nation to rule, as well as the fighters and the will to fight without any of the self- guilt that needlessly plagues the West. I can only hope that the correct experts are consulted for media responses to Mahmoud's latest round of Taqiyya. Yet hope all that I want, I have little faith that this will happen. Of course the experts will weigh in, but as has happened since 9/11 their analysis will fall mostly on deaf ears, if it reaches them at all.
************************
The rest is at my site, which I have finally revived myself enough to write at again. HAHAH!
What Would Charles Martel Do?
Posted by Kiddo at 12:26:00 am

brilliant. thanks for reposting this.

When the islamodungbeetles finally can no longer suppress their desire to do harm to Europe, I hope our spineless leaders put to use the squadrons of Typhoon Eurofighters they are building.
Lets do the job properly then. We have the planes, we have the Forces, can we find the guts to finish this slow war finally?

Reliapundit, no problem, I love this whole letter. Pera really takes it all on.

Pram--agreed. We need to recover our will.