Today I want to talk about a topic that is the most important with regards to the future of Iraq. The children. For it is they who are the vessels of hope for Iraq and it's future.
To be a child in Iraq during this time must be a mixed bag. Fear and sadness combined with hope and happiness.

For a lot of our soldiers, it is the children that give them strength. Many of them go out of their way to bring a smile to the children's faces.

Somehow, the children must come through this as unscathed as possible. And there are things going on in Iraq to help and signs that they are working. 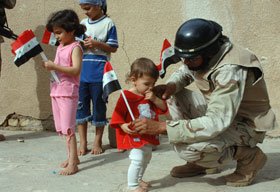 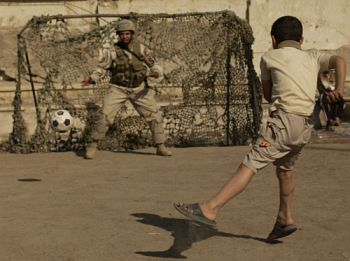 From No End But Victory:

A Soldier back from Baghdad tried to explain to me the nature of our situation on the ground in Iraq. He, like so many, arrived in theater with blood in his eyes, his mission being to kill the enemy and secure the peace. This is what we train our Men and Women to do. They have been thoroughly trained, and are fully prepared to be ever vigilant; to protect and defend, and to do so with honor and integrity. They have done this in spite of the challenges they faced, and have won the war. This enemy is defeated in Iraq militarily. However, there is an inevitable transition in a theater of operations that requires our Soldiers to then “Win the Peace”, and this work continues in Iraq with many setbacks but many MORE successes.

He realized soon after arrival that the “blood in his eyes” mentality would not serve him well in winning the peace; that what he needed instead was solemnity, humility, respect and empathy and an open-mindedness that is at times hard to muster when you are being shot at and you are watching IED’s take out your brothers and sisters in the streets of Baghdad and surrounding areas. The balance of mind, the strength of conviction, the well-trained inclination to revert to a battlefield mentality, and the critical need to recognize each situation accordingly, react appropriately, AND know the difference, is the job description of our Soldiers in theater. I know almost no American citizen today that I would entrust my life to with these things as their responsibility, yet I completely trust our American Soldiers to do this routinely and as a matter of course.

As they do this work, our Soldiers live among the every-day average Iraqi citizen; the men, women, and children on the streets and in their homes, at school and work, in hospital, and in their house of worship. They have come to know each other, each with a tempered suspicion and a varying degree of mistrust and apprehension. Over time, these feelings have softened to an extent, and the Soldiers and the citizens have forged relationships; bonds of mutual reliance and shared need to rebuild lives and move ahead with the business of rebuilding a country.

The country we are rebuilding is unimaginable to anyone that has never been there. As described to me, many of these people are living in the sixth century; mud huts, no sanitation, no utilities to speak of outside the major city, or far enough removed from one of Hussein’s palaces. They live this way both mentally AND physically. They have been trained and have been led to believe that any non-Iraqi or non-Muslim “outsider” comes armed with a sword to behead them, and plunder and pillage their women and children and their ways of life. This is ingrained in them from birth, and reinforced throughout their relatively short lives; life expectancies hovering around 50 years. The parents, like parents in any society, are the teachers and trainers of their children and they merely pass along to the subsequent generations the wisdom and ideals they have grown to believe and presume to be correct. The story of the child bringing the note from the woman rings louder upon reflection;

A Soldier working to rebuild schools there tells of a day where a 2 ounce bottle of body lotion probably saved his life, and the lives of the soldiers attached to this mission. A fundamental element of a Soldier’s life in this Theater is to try and establish a relationship with the citizens; to show we are trying to help them, and guide them ever-so-slowly back on track and to pick themselves up and move forward with rebuilding a country that has never known even the simplest of things we take for granted every day. This Soldier gave one of his small bottles of body lotion to a local Iraqi woman, out of kindness, and in so doing introduced her to a small luxury she had never known before. She smiled appreciatively and went on her way. These bottles of body lotion are gold to a Soldier in Iraq and while relatively inexpensive, have saved many a chaffed hand or arm, and have even given a small taste of heaven out in that miserable desert with a thorough rubbing of the feet.

Several hours after this small act of kindness, an Iraqi child approached this Soldier, gave him a piece of paper with something written on it, and pointed to the Iraqi woman who had reappeared on the street. After the required 2 translators to verify the contents of the note, it was apparent she had offered information on the location of a weapons and ammunition cache. Upon investigation, it turns out her information was accurate and the weapons and ammunition was seized and ultimately destroyed. Countless lives were saved by that gesture of appreciation. These stories abound, and are increasing in number every day. From a small act of kindness comes an exchange of cooperation that saved lives and built lasting friendships while further strengthening a bond of trust and confidence.

this story could just easily ended in the death of that Soldier at the hands of a remotely detonated suicide vest strapped to that child, but it didn’t. It is highly likely that that Soldier WOULD have been felled by this child a few short years ago.

The future of this Iraqi child is uncertain, however, you can be sure he will carry with him the memory of that small contribution to breaking the circle of violence and hate and mistrust. He will remember that day, he will remember and recount to his peers the appreciation from the Soldier who’s life he helped protect, and the expression of gratitude from that Iraqi woman that he helped facilitate. So it is with countless more children in Iraq, and so will it be for our Soldiers when they return home. 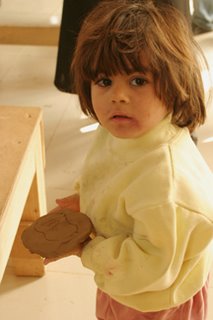 Many people have written about how they can help the children in Iraq. I began vetting, or scoping out NGO’s (Non Government Organizations) who have a firm foundation and strong programs. In addition, I have met with “up and coming” NGO’s who are developing strong programs but are still getting established, including training on organizational management and governance (more about these organizations in future posts).

I visited with Kurdistan Save the Children whose work expands Kurdistan and includes Baghdad. They are strong in education, youth centers and cultural centers, which they call Kaziwa which means ‘dawn’ in Kurdish. I visited one center in Sulaimaniya and was so pleased at the hard work four young men have
accomplished over the years.

They have developed a large youth center with many activities including sports, art, computer training, English classes, music rooms, computer rooms, internet café (the young people pay tiny fee which teaches them respect of equipment) exercise workout room (for both girls and boys, scheduled appropriately), a media and film department, cafeteria, and a huge center hall with a circle upper balcony, perfect for drum circles. He was very open to different activities including the drum circles that I suggested. Music and art in addition to other activities is strongly encouraged.

The manager of this center is a young man with his 3 associates and they have the drive and good hearts to help the children in the city. I was amazed at the dedication these people have given to develop this center for the youth. On the tour, he showed me one room after another, for different activities including dialogue groups and outside is a sports field and a beautiful garden.

His wish for the youth is an LCD and laptop for the classes and trainings, movie DVDs for the developing media department, additional books for the library, especially in English (books appropriate for 14-26 year olds, perhaps some American classics), musical instruments and… visitors, who are willing to spend time with the young people, whether through an activity, lecture or discussion.

Kurdistan Save the Children has other youth centers including Darbandikhan, Raniya, Koya, Kalar, Khanaqeen, Baziyan and Kirkuk and cultural centers in Halabja, Kirkuk, Qaladiza, and Raniya. In addition, they have Children’s homes in both Baghdad and Kirkuk which help Iraq’s growing number of street children, those affected most by the conflict and in need of the most help.