An Interesting Catholic Article from 2003 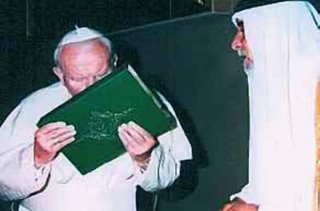 I rather stumbled upon this while perusing other articles at Ali Sina's www.FaithFreedom.org. I must admit, I didn't realize the attention that the Roman Catholic church was paying to this issue under Pope John Paul II and was even a bit shocked, due to the constant pressure during his papacy for "interreligious dialogue" (which won him hatred, not praise from most Muslims). I, myself, feel rather guilty about my feelings towards the late Pope's words and actions, though it was hard for me to forgive any Pope kissing a Koran. Period (above). Yet behind the scenes the entire time, the Pope had an army of scholars (not the least of which is the current Pope) researching and defending. That most of this reached little of the American public is of little consequence now. Read the beginning here:

THE DISAPPEARANCE OF CHRISTIANITY IN ISLAMIC COUNTRIES:

We must first highlight a seemingly rather curious fact: in all the countries of North Africa (Egypt, Libya, Tunisia, Algeria, Morocco), before the Muslim invasion and despite incursions by vandals, there were blossoming Christian communities that contributed to the universal Church great personalities, such as Tertullian; Saint Ciprian, bishop of Carthage, martyred in 258; Saint Augustine, bishop of Hippo; and Saint Fulgentius, bishop of Ruspe. But after the Arab conquest, Christianity was absorbed by Islam to such an extent that today it has a significant presence only in Egypt, with the Coptic Orthodox and other tiny Christian minorities, which make up 7-10 percent of the Egyptian population.

The same can be said of the Middle East (Lebanon, Syria, Palestine, Jordan, Mesopotamia), in which there were flourishing Christian areas prior to the Islamic invasion, and where today there are only small Christian communities, with the exception of Lebanon, where Christians make up a significant part of the population.

As for present-day Turkey, this was in the first Christian centuries the land in which Christianity bore its best fruits in the areas of liturgy, theology, and monastic life. The invasion of the Seljuk Turks and the conquest of Constantinople by Mehmet II (1453) lead to the founding of the Ottoman empire and to the near destruction of Christianity in the Anatolian peninsula. Thus today in Turkey Christians number approximately 100,000, among whom are a small number of Orthodox, who live around Phanar, the see of the ecumenical patriarchate of Constantinople, who has the primacy of honor in the Orthodox world and who holds communion with eight patriarchs and many autocephalous Churches in both East and West, with approximately 180 million faithful.

In conclusion, we may state in historical terms that in all the places where Islam imposed itself by military force, which has few historical parallels for its rapidity and breadth, Christianity, which had been extraordinarily vigorous and rooted for centuries, practically disappeared or was reduced to tiny islands in an endless Islamic sea. It is not easy to explain how that could have happened. [...]

In reality, the reduction of Christianity to a small minority was not due to violent religious persecution, but to the conditions in which Christians were forced to live in the organization of the Islamic state. [...]

Please continue reading here. These are the basics laid out, but important coming from the source they are from.
Posted by Kiddo at 5:33:00 am

Yes. Yes. Very very good reading. At some point I might actually do some work tonight.

I cringe everytime I see that pic of JP kissing the Koran. Triple yuck. What was the man thinking, kissing that vile hate filled book?

John, I feel the same way. That hideous book is BLASPHEMOUS to Christians. Why would ANY Pope kiss it? That's why I'm more of a Benedict kind of Neo-con Zionist Jew Bitch Whore. I want to see someone go into some Jesus in the Temple action, throwing it off the tables. Jesus was pretty clear about "false prophets" coming after him, and he didn't exactly say to treat them with the same love he spoke of in the Sermon on the Mount.