Today, our Memorial Day for 2006, marks the 553rd anniversary of the fall of Constantinople. Paul Belien gives a moving account of the story at Brussels Journal. His recalling of the appeasement that led up to the seizure of the city is especially notable in our time: appeasement is a fool’s vain wish to avoid the predator: 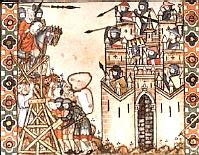 In 1374, when the Ottomans were only a nascent power, Prince Manuel, governor of Salonica and a son of the Byzantine Emperor, had tried to rally the inhabitants of his city against the Turks. But the Salonicans did not want to bear the high costs of defending their city and promptly threw him out. Out of fear of the Turks his father, Emperor John V, refused Manuel shelter within the walls of Constantinople and so did all the other Byzantine cities. Consequently the prince was forced to seek refuge with... the Ottomans, whom he served until 1394, when he became Emperor himself.

When the Sultan demanded a Byzantine princess from the Emperor, the latter gave away his daughter Theodora to spend the rest of her life in the Sultan’s harem. He also gave the Turks a church in Constantinople to convert into a mosque. All the appeasement was in vain, however, because in 1453 the Turks demanded that the Byzantines surrender Constantinople. This time the Byzantines refused. In their final hour they saved their honour. “They fought for the city as they had never fought for the empire,” writes Jason Goodwin in his history of the Ottoman Empire. After a siege of two months the city fell. Emperor Constantine XI, Manuel’s son, died with his sword in his hand.

…Crashing aside the Christians at Varna in 1444 they secured possession of Walachia, Moldavia, Transylvania, the territory now called Bulgaria and Romania, then in 1453 they put again under siege Constantinople which on May 29 fell into the hands of Mehmet II and by the way: do you know who was Mehmet II? A guy who, by virtue of the Islamic Fratricide Law which authorized a sultan to murder members of his immediate family, had ascended the throne by strangling his three year-old brother. Do you know the chronicle that about the fall of Constantinople the scribe Phrantzes has left us to refresh the memory of the oblivious or rather of the hypocrites?

Perhaps not. Especially in Europe, a Europe that weeps only for the Muslims, never for the Christians or the Jews or the Buddhists or the Hindus, it would not be Politically Correct to know the details of the fall of Constantinople. Its inhabitants who at daybreak, while Mehmet II is shelling Theodosius’ walls, take refuge in the cathedral of St. Sophia and here start to sing psalms. To invoke divine mercy. The patriarch who by candlelight celebrates his last Mass and in order to lessen the panic thunders: “Fear not, my brothers and sisters! Tomorrow you’ll be in the Kingdom of Heaven and your names will survive till the end of time!”. The children who cry in terror, their mothers who give them heart repeating: “Hush, baby, hush! We die for our faith in Jesus Christ! We die for our Emperor Constantine XI, for our homeland!”. The Ottoman troops who beating their drums step over the breaches in the fallen walls, overwhelm the Genovese and Venetian and Spanish defenders, hack them on to death with scimitars, then burst into the cathedral and behead even newborn babies. They amuse themselves by snuffing out the candles with their little severed heads... It lasted from the dawn to the afternoon that massacre. It abated only when the Grand Vizier mounted the pulpit of St. Sophia and said to the slaughterers: “Rest. Now this temple belongs to Allah” Meanwhile the city burns, the soldiery crucify and hang and impale, the Janissaries rape and butcher the nuns (four thousand in a few hours) or put the survivors in chains to sell them at the market of Ankara. And the servants prepare the Victory Feast. The feast during which (in defiance of the Prophet) Mehmet II got drunk on the wines of Cyprus and, having a soft spot for young boys, sent for the firstborn of the Greek Orthodox Grand Duke Notaras. A fourteen year-old adolescent known for his beauty. In front of everyone he raped him, and after the rape he sent for his family. His parents, his grandparents, his uncles, his aunts and cousins. In front of him he beheaded them. One by one. He also had all the altars destroyed, all the bells melted down, all the churches turned into mosques or bazaars. Oh, yes. That’s how Constantinople became Istanbul. But Doudou of the UN and the teachers in our schools don’t want to hear about it.

No, we don’t teach history that way anymore. But Oriana Fallaci is dying, and death gives her freedom to tell the truth, the whole bloody truth, and nothing but the horrendous truth.

This has been a report on the Religion of Peace. They will tell you we made it up.

For a poetic version, see the Baron’s post from January on Yeats’ “Sailing to Byzantium”.

Thank you. I appreciate any posts dealing with my beloved Byzantium. I had actually not put that together muself though.

--Neo-Con Zionist Jew Bitch Whore
a.k.a. One of the Last Byzantines
a.k.a. Pim's Ghost

And still people are shocked that the Romanians regard Vlad the Impaler as one of their national heroes. I, for one, am not shocked at all.