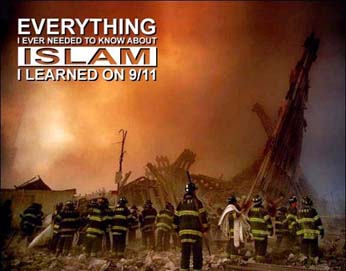 I won't budge from my position that our own are responsible for not just 9-11 but the entire mess we have from the 60s onward. We made this happen. We didn't just allow it to happen, we made it happen.

We let many of our own whip up a frenzy among savages, no different from a thug enraging a pit bull for fun. Now the beast is bred and fit for fighting. Our own still feed its frenzies and direct it as well as they can at us. The dog of Islam goes down, and by God, we'll have to deal with our own who make that necessary.

I don't suppose the dog of Islam has any resonsibility of it's own in this situation, does it? Seems to me that if the dog of Islam didn't have its mind permanently fixated on world domination we would have had a hard time making it do anything. People aren't dogs, and if they sacrifice their reason to the delusions of religious hysteria, that's their responsibility. Yes, we were blind to the danger, yes our leaders (and not just the political ones) let us down by not identifying the enemy, but ranting about how it's all our fault is just another form of absolving the enemy and throwing ourselves on the sacrificial altar and I have no intention of doing that no matter who else finds it emotionally satisfying.

"our own are responsible for not just 9-11" ...sorry, we depart on that one ..
'I was ordered to fight the people until they believe in Allah and his messenger and the last day'

I think that will do it

Dag,
I don't quite agree with the way you expressed your ideas here. But in a sense you are correct. We are reaping the whirlwind of the 60's.

Dag, I didn't mean to jump all over you, I get furious with our so-called "leaders" as well. But as Walid Phares points out in his book, the Islamofascists didn't just fill a vacuum. This was a planned, orchestrated effort over a period of decades and their main target was academia and the "intellectuals" who are supposed to supply us with an accurate view of the world. And who sold us down the river for grant money and a chance to indulge their own hate-America agendas. A comeback try by a totalitarian religious ideology straight out of the Dark Ages is hard for people to believe even when they see it. The Islamists saw us tearing ourselves apart over Vietnam and it must have looked like a road map to them. Get the Infidels to hate themselves, self-hatred destroys the will to survive. We weren't recognizing that we were doing the wrong thing and changing it, we were self-flagellating and attacking each other. That's what we're doing now, and we don't have time for that. The only thing that will save us is for enough people to learn who the enemy is and how to defeat it. We can stomp all over the fools and fifth columnists afterwards, what's needed now is to get them the hell out of our way.

Dag is a dramatic writer at heart, in my opinion. I think Dag knows what the problem is. It is Islamofascism. And, in his opinion, it is our weak response to islamofascism.

Ultimately, Dag is correct, if you think about it this way. If our leaders do not get serious, then we will lose, and that is our responsibility.

Wow, kind of freaky seeing my screen saver on your blog. Anyway, this enemy was a counter to the Soviet threat we were up against at the time, and any thorn in their side was a boon to us. I.e. the Taliban shooting RPG's at the Soviet advance. We also sent plenty of support of materiel to the USSR to defeat the Nazis (and offered Marshall Plan funds to rebuild in the Warsaw Pact, though that was declined), but I wouldn't necessarily say this fed the beast of the Cold War. We fed the Afghani resistance, and Egypt for billions in aid, as bulwark against communism's spread to the mideast.

This current beast has been attacking us since the 7th century, when it imperialistically colonized many great civilizations and de-Christianized half of what was then the Christian lands. We are in the latest stage of a very old war.

I argue that support for the pit bull that's biting us comes from the monster SUV's and trucks, from people who drive ONE block out of habit, from suburban flight to areas where you have to drive to everywhere you want to go, from the thorough gutting of public transport, trollies and electric buses (powered by American coal and nuke plants) now all gone but in the biggest cities. That stinky pair of filling stations on the corner do more to support the spread of Islam than foreign policy. Every time you put that nozzle in your gas tank, a Wahabi mullah strokes his beard and smiles.