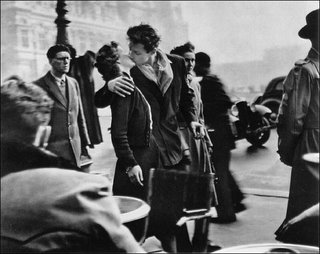 In Paris, in springtime, the youths are full of vim and vigor. And who can blame them? After all, Paris is one of the most romantic places on Earth:


Second night of rioting in Seine Saint Denis (the infamous 9-3). The French preSS is carefully talking about several incidents and putting the whole thing down to unsolved social issues (left over from the previous round of burning and looting). Last night's action saw a police station attacked by a mob.

The night before a mayor's home was attacked.


Ah, to be young again, in Paris. Montmarte, the Trocadero, the Eiffel Tower.

You know, in France, they kiss on Main St.

The touch-paper is lit and the great and good, look the other way.

BLD,
As you said in yesterdays post on the lovely springtime in Paris, let the place burn. it will serve to wake up Europe.

I would prefer to see that no one gets hurt, but I believe the longer we take to really start fighting this war, the worse it is going to be for us. Therefore, I hope the Jihadis of Paris run amok.

What exactly does it take to set off a French car? I'm betting one match.

Hi Pim,
I hear French Cars are made for maximum flammability. Thing is, if their city wasn't going up in smoke, the French would really look like a bunch of pussies when they all of the sudden surrendered out of nowhere.