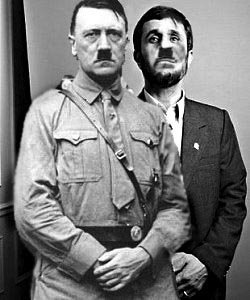 The Germans are being courted by a new suitor, and his words are sweet music to their ears:


BERLIN (Reuters) - Iran’s President Mahmoud Ahmadinejad told Germans they should no longer allow themselves to be held prisoner by a sense of guilt over the Holocaust and reiterated doubts that the Holocaust even happened.

In an interview with Germany’s Der Spiegel magazine, Ahmadinejad said he doubted Germans were allowed to write “the truth” about the Holocaust and said he was still considering traveling to Germany for the World Cup soccer tournament.

“I believe the German people are prisoners of the Holocaust. More than 60 million were killed in World War Two ... The question is: Why is it that only Jews are at the center of attention?,” he said in the interview published on Sunday.

“How long is this going to go on?” he added. “How long will the German people be held hostage to the Zionists?... Why should you feel obligated to the Zionists? You’ve paid reparations for 60 years and will have to pay for another 100 years.”


Succumb to the seduction, Germany. You know you want it, sweetie.
Posted by Pastorius at 5:08:00 pm

Well, he got one thing right. The German people are prisoners of the Holocaust. Collective guilt has been used by the left to emasculate and destroy the West and destroy its civilizational confidence. And the sin is compounded by failing to recongnize the relationship between National Socialism (Fascism) and the current left.

I for one don't feel guilty for slavery, the holocaust, the Inquisition, the Crusades (for which I am actually thankful), the discovery of America, the settling of the American West or ANYTHING else whatsoever. I have enough trouble concerning myself with my own behavior.

I can understand what you mean, but in my opinion it was right and just for the German people to realize how evil they had become, and to pay penance for it. There were an awful lot of them involved you know.

Collective guilt for real or imagined past sins is one of the most destructive manipulative tools employed by the unhinged left. For nearly too many reasons to enumerate. But, just to touch on a few. . . . First of all, the guilt of the German people was misshaped and distorted by the rabid left. Had the German people come to grips with the reality that totalitarian socialism based on a nihilistic relativistic world view was responsible for the orgy of killing then yes, for THOSE Germans living at that time and for all mankind in the future it would be a useful lesson to study and understand what happened. Instead the lessons drawn from the German experience is nearly always completely 100% WRONG.

The Germans living today are NOT responsible for the Holocaust. Ironically, the left is the natural heir of evils of National Socialism and they are the ones who presume to preach to us the lessons of the Holocaust. As soon as one accepts the fallacy of collective guilt for past sins there is literally NO limit to the mea culpas that can be forced upon any group not wielding the reins of power. Collective guilt is a bottomless pit of mendacious evil manipulative coercion.