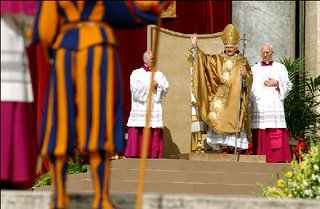 I just found this a bit funny, or full of "ironicness" as Stephen Colbert put it once, seeing as the prayer intentions sent out by the Pope are released to Churches worldwide annually and not as events happen:

Sep. 04 (CWNews.com) - The Vatican has announced the prayer intentions designated by Pope Benedict XVI (bio - news) for the month of September.

The Holy Father's general prayer intention is: "That those who use the means of social communication may always do so conscientiously and responsibly." The Pope's mission intention is: "That in the mission territories the entire People of God may recognize that permanent formation is their own priority."

So did Pope Benedict XVI know that he'd be saying something that would be, well, under scrutiny by those who "use the means of social communication"? At any rate, it would seem that all of our prayers didn't do too much good considering how his speech was quoted out of context and broadcast throughout the planet's most irresponsible region of using those "means of social communication".

One other note, this has been broadcast on the global Catholic network, EWTN, translated as those who "use the media". Yeah, now you all know that I watch EWTN. But you have to admit, that's a good one. I believe that the prayer intention for October is to pray for an end to terrorism, so let's hope that the ummah doesn't go and make that one even more relevant than it already is.
Posted by Kiddo at 7:25:00 pm