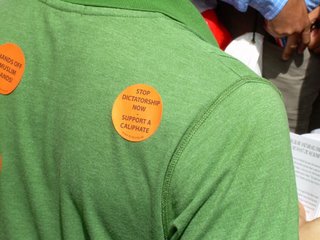 These stickers were handed out at the "Time To Go" anti-war rally in Manchester, England yesterday.

Click here to see more photos of the insane antics of the anti-war crowd.

How is it they don't understand that these are both representations of radical Islamic ideology. An ideology which would stone gays to death, em-burqa women, ban music that is anything other than drums and chanting, etc.?

Is it me, or does it seem as if the bottom is falling out of the cave the lefties live in? Does it not seem that there is no depth they would not sink to in order to rebel against Western Civilization?

Or, do they really want the Fascism they are inviting into our homes?
Posted by Pastorius at 5:57:00 am

Pastorius, they still pine for the good old days of the Gulag, the Lubyanka, the Year Zero of Pol Pot.
Radical islamists are nothing new to them, any totalitarian ideology will do.

Hitchens put it best . He gives three explanations for the mindboggling phenomenon of the Unholy Alliance. The first two are based in nostalgia. First, "nostalgia for the vanished 'People’s Democracies' of the state socialist era." Second, "To many callow leftists, the turbulent masses of the Islamic world" are "a hasty substitute for the vanished proletariat of yore." Finally, "once you decide that American-led 'globalisation' is the main enemy, then any revolt against it is better than none at all. In some way yet to be determined, Al-Qaeda might be able to help to stave off global warming."

New Leftists pine for a massive "die-off" of billions of human beings (see dieoff.org). The best way of achieving that would be to put (death loving) muslims in charge of the world. After a certain length of time under a caliphate, due to massive blood-letting combined with economic collapse, the die-off would be achieved--and earth would be saved. So the reasoning goes.

According to billionaire Ted Turner, if you reduce the world's population to a billion, the earth could recover from all the bad things that western capitalism has done to it.

It's usually the young, the ignorant masses, the pot smokers, the aging hippies that are affected by sheer stupidity, ignorance, and a lack of knowledge about the world that they live in.

Whenever I heard someone parrotting the "we should give up this right, so we can save lives", the sarcastic response would come to me "I know a way to save lives, accept Sharia law, that will make the Islamic fascists all hunkey dorey with us. NO GO PUT ON YOUR BURQUA!!"

I was being sarcastic, but unfortunately it looks like these people are serious, this is scary.

I must say, this pic frightens me too. I just don't get it. I try to understand it as sheer rebellion, which I think in a sense it is, but this is rebellion by throwing oneself off a cliff. Problem is, they want us all to throw ourselves off the cliff.

Do you have a source for the Ted Turner quote? That is amazing and sick.

GN,
Hitchens did put that well. It does seem like that is what is going on.

Steve,
I know what you mean about it being the weak, ignorant pot smokers. I understand. Like Isaid, I try to understand this as rebellion, but this is such stupid rebellion it is almost impossible for me to understand. Somehow these kids must be not only attracted to the idea of fighting against the West, but also they must be attracted to Islam itself. I guess.

How anyone could look at Islam and choose it for their life is beyond me. It is against everything I have ever loved and believed in.

Anybody remember "Animal Farm"? That used to be required reading when I was in school..... of course that was such a long time ago. I just don't understand. Don't they know that once they over throw the existing government and put in place what they are advocating, they will not be able to do what they are doing now? Protesting will be a thing of the past. The pigs are far WORSE than the humans........

It brings to mind one of my favorite movie quotes, from the Lord of the Rings..... : ..."Much that once was is lost, for none now live who remember it."

It is worse than you think. The conservative White House, with its "compassionate conservatism", is worshiping at the alter of diversity by silence regarding the supposed "moderate" Islamists in the US.

I am glad to see the new posture that Bush is taking. It is definitely needed. However, I am very disappointed with Bush's lack of addressing the Islamists in this country. Mr. President, read the Quran and the Hadith. Islam is NOT a peaceful religion.

The supposed moderates in the Islamic community in the US are anything but. The enemy is here amongst us.

The MSM is worshiping at the alter of diversity as well when it comes to "moderate" Islamists in the US. If these "moderate" organizations were privately raising money for the Klan, they would be all over them. The country would be inundated with special reports on the evil two faced "moderates". The nation would rally to the cause and address the enemy in our midst.

Yet the media gives a complete pass on:
WAMY - inspire muslim youth in America to become martyrs, DAR AL-HIJRAH - The 9/11 mosque preaching hate and Jihad, Muslim World League and its spin-off the International Islamic Relief Organization both suspected Al-Qaida fronts, Dar al-Arqam, led by cleric Ali al-Timimi rejoiced at the Columbia Space Shuttle exploding claiming it as a "good omen", SAFA GROUP large organization fronting several money laundering organization for Islamists, and my favorite CAIR, whose leader is video taped praising Hezbollah and Hamas. CAIR is even recognized by the White House as an example of peace-loving Islam.

Research these, especially CAIR. Bush needs to awaken. The fox is in the hen house, and the owner of the hen house seems to be just fine with it.

They might as well be saying "Revive the Middle Passage, Take Me!!"! Idiots.

I don't think reasoned belief has anything to do with those stickers. The Left has proved itself as incapable of reason as the Muslims.

This is the kid doing anything to stick it (no pun intended) to The Man. You know, like the story of a kid joining forces with the biggest bully in the whole school, his worst enemy if you think of it rationally, only for the purpose of vandalizing the property of a teacher who had the audacity to give him a failing grade.

What with the Muslims throwing a temper tantrum at cartoons and 600 years old quotes, and the Leftists still smarting from the failing grade history has given Marx and Lenin, we have here an alliance of the disaffected, even if they're worst enemies of each other and would each first strangle the other if they succeeded in getting even with The Man.

The trouble is they control the media and are working toward having weapons of mass destruction. That's what makes this slightly more dangerous than a school matter.