Abiogenesis, or "spontaneous generation," was accepted as scientific truth from the time of Aristotle up to the 17th Century. Wikipedia is all:

According to Aristotle it was a readily observable truth that aphids arise from the dew which falls on plants, fleas from putrid matter, mice from dirty hay, and so forth. Such was the prestige of the ancient Greek philosophers in general. In the 17th century such assumptions started to be questioned; such as that by Sir Thomas Browne in his Pseudodoxia Epidemica, subtitled Enquiries into Very many Received Tenets, and Commonly Presumed Truths, of 1646, an attack on false beliefs and "vulgar errors." The indignation which greeted Browne can be judged from the reaction of his contemporary, Alexander Ross: "To question this (i.e., spontaneous generation) is to question reason, sense and experience. If he doubts of this let him go to Egypt, and there he will find the fields swarming with mice, begot of the mud of Nylus, to the great calamity of the inhabitants."

Nevertheless, experimental scientists continued to roll back the frontiers within which the spontaneous generation of complex organisms could be observed. The first step was taken by the Italian Francesco Redi, who, in 1668, proved that no maggots appeared in meat when flies were prevented from laying eggs. From the seventeenth century onwards it was gradually shown that, at least in the case of all the higher and readily visible organisms, the previous sentiment regarding spontaneous generation was false. The alternative seemed to be omne vivum ex ovo: that every living thing came from a pre-existing living thing.

I remember that in my youth I was fascinated with the maggot experiment when I read about it in an encyclopedia.

James Joyner at TCS Daily discusses the NIE report on Iraq, which is being heralded by the media and the Democrats because it supposedly makes the claim that our involvement in Iraq is "creating more terrorists." This is used by the Dems and their media spokesmen to argue for surrender. He points out that the cicadas are chirping about only select passages, while ignoring others which suggest quite different conclusions, particularly the assessment that our surrender would be disastrous. This is true of course. But Joyner doesn't really identify what I think is the main flaw in the NIE thing, which I'm getting around towards blurting out if you stay with me for a moment.

Joyner looks at this bit of the NIE:

"Four underlying factors are fueling the spread of the jihadist movement: (1) Entrenched grievances, such as corruption, injustice, and fear of Western domination, leading to anger, humiliation, and a sense of powerlessness; (2) the Iraq "jihad;" (3) the slow pace of real and sustained economic, social, and political reforms in many Muslim majority nations; and (4) pervasive anti-US sentiment among most Muslims—all of which jihadists exploit."

He concludes that three of these factors predated 9/11. As to Iraq, Joyner goes:

The invasion of Iraq simultaneously created a killing zone so that jihadists could be dealt with in a centralized location away from the United States (the so-called "Flypaper Strategy") and became a rallying cry that generated more terrorists. We've killed or captured hundreds upon hundreds of al Qaeda terrorists, including scores of their senior leaders around the world, yet they have thus far, unfortunately, responded in hydra-like fashion.

In this way, Joyner accepts -- or at least doesn't get around to rejecting -- one of the premises of the NIE: that our actions either "create" jihadis out of previously-normal and decent people, or cause them to remain normal and decent. I reject this premise. We should deem that people are either members of the jihad or not members of the jihad, even if they haven't come out of the closet yet.

Sometimes an event happens -- say for example, young people in Colorado dancing with each other, or Burger King printing an offensive ice cream lid, or the U.S. forcibly removing a mass murderer of hundreds of thousands of Muslims so that the Muslims may then choose their own leaders, or a woman wearing a bikini, or a British office worker putting a Piglet toy on her desk, or people watching a soccer match -- as a result of which, a Muslim might be inspired to join the jihad. I suggest that the proper way to look at such a situation is not that the event "caused" that person to "become" a jihadi; rather, we should look at this as a jihadi coming out of the closet, for whatever reason. Getting in touch with his inner-jihadi. Look, if a person becomes a jihadi because they were "provoked" by such innocuous and trivial things (and even more so, if they're "provoked" by something like the war in Iraq by which the West has made major sacrifices to bring the possibility of freedom to millions of Muslims in Iraq), then that person is not "lost" in any meaningful sense: they were lost to begin with. They are picking teams, their true colors are coming out.

Among other things, it's disgusting and immoral to put the blame for this person's shift-to-evil upon the perpetrator of the innocuous (or affirmatively-good) event. If we say that Burger King is at fault for "causing" some people to join the jihad, we're in moral no-man's-land, we've completely lost our bearings. The notion that there is a large group of Muslims out there who are "swing-jihadis," who could swing for civilization, or could swing for the jihad, and that we need to tempt them to our side, is absurd. The line between supporting murderous jihad and not supporting murderous jihad is not a fine line, it's a chasm. Anyone who could potentially become a jihadist is a lost cause from the get-go, and it's absurd to suggest we should be courting their goodwill. Such a person is the enemy already, even if they have not come out of the closet. Enough of this notion that our actions "create" jihadis. This is the same line of thinking that holds that Muslims are like element on the periodic table: a dash of this, a dash of that, and BOOM!, Muslim anger is sparked, it erupts, Muslim violence happens. No, people bear moral responsibility for their own actions.

So let me try and sum up my main problem with the NIE again. You take event X, in this case the Iraq war, and you can look at the data, and the data says, "ok, before event X there were so many jihadis, and after event X there are so many millions more." One conclusion you can draw from this is that event X "caused" these millions to "become" jihadis -- which puts the moral blame for their choice on the perpetrator of X. The other conclusion you could draw is that these millions became jihadis upon the occurence of event X through their own choices and/or their own preexisting evilness. Important: Which of these two moral outlooks is the correct one cannot be verifyed by data, it depends entirely on one's subjective moral view of the world. This is where the NIE goes wrong, presenting data through the lens of a particular moral outlook, which clearly is by no means the only one, and as I see it is the incorrect one. And, these people are experts in collecting data, they're not professors of moral philosophy. To say that the NIE shows the war is "creating" jihadis is no different from social science data showing a correlation between crime and poverty, and drawing the conclusion that poverty "causes" crime. No, it's data, and the moral judgment you draw from that data is your own. 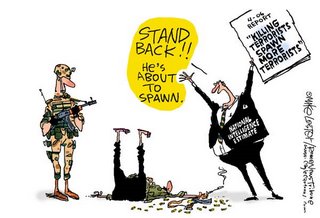 No: the most useful Latin sentence is:

Snorri, I disagree. Your five words are the most true statement to address the leftist/pacifist/surrender monkey nonsense, but my five words are useful in most political conversations. Post hoc ergo propter hoc seems to me to be the most common logic error, and one should always consider it when one hears claims of causality.

I don't have any evidence to back up my claim that it is the most common logic error, but I'm sure psychologists have analyzed common human logic errors. It would be interesting to know what the academic literature says.

Demosthenes: maybe you are right, but the most common error seems to me that people ignore the evidence altogether, except when it fits their preconceptions. Even if I am right, "post hoc ergo propter hoc" remains very useful as a counter-argument, of course.

When I was about 4 years old, a neighbor bully who was a year older chased me and I ran to may Dad. He asked, why don't you chase him? "Oh, I hadn't thought of that." So I did, and guess what. He ran away. Good thing, too, because at that age I had no idea what I would do if I caught him.

But the point is, if you run from them, the will chase you. That's ust who those maggot are. My neighbor grew out of his childish behavior. But when adults do it, you know they will not change. Islam needs to change, drastically. Until we push back, they won't. NO COMPROMISE, or we lose.