The Sphincter Of Jihad ... otherwise known as the Arizona 9/11 Memorial 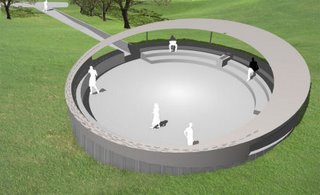 Anyway, the lefties have taken yet another opportunity to insult our country in the form of a "memorial" to the victims of the 9/11 Jihad attacks on America. It bears a striking resemblance to the "Crescent of Embrace" 9/11 memorial, doesn't it?

LGF commenter, Haakodel, has dubbed it "The Sphincter of Jihad." I think that is an appropriate moniker, and you will too, after you have read the following:


One inscription states, “You don’t win battles of terrorism with more battles.” Another: “Congress questions why CIA and FBI didn’t prevent attacks.” And another reads, “Erroneous US air strike kills 46 Uruzgan civilians,” referring to a wedding reportedly hit by mistake in Afghanistan.

“It’s a worldview that is critical of America, and in many cases cheapens 9/11,” said Greg Patterson, a lobbyist and consultant who operates the EspressoPundit blog, where he and his readers have been critical of the memorial. “It is bent on attacking the Bush administration’s take on the war, at the expense of the memory of 9/11.”

Rep. Russell Pearce, R-Mesa, said he was stunned to learn of the inscriptions. “To politicize it to me is absolutely outrageous, instead of a memorial to remember those who have sacrificed their lives,” he said.

Tempe resident Donna Bird, whose husband Gary was killed in the attack, was among the 30-member Arizona 9/11 Memorial Commission created by former Gov. Jane Hull in 2002.

She said all the inscriptions were found factual by an Arizona State University history professor. She added that she wouldn’t have helped design the memorial, which names her husband, if it were political.


As Charles says, "We would be remiss if we didn’t point out that when seen from overhead, the memorial bears a marked resemblance to a crescent." 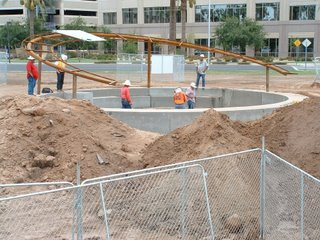 As I often do, when I become totally enraged over a news item, I spent a little time browsing the comments of other LGF readers on this subject. I find this helps mediate my anger. I calm down a bit. My natural inclination is to get out the torches and pitchforks and start stringing a rope over a tree in front of City Hall. Which, of course, makes no sense whatsoever.

It seems to me this "memorial" must disappear, but LGF reader, Z, has another way of looking at it:

Since our "leaders" have conceded that we will be hit again, and since we are not striking the heart of Islamism to make jihad unpalatable to these fanatics, we will be hit again. As much as these memorials irk all of us, once we are hit again, and again, these memorials will be a reminder to the peace crowd that they were the ones who did not want to respond. Sooner or later the jihad conflict with the west will come to a head and the west will no longer be able to evade it. That is for sure.

These "memorials" will be interesting artifacts and a source of never-ending shame to those who erected them.
Posted by Pastorius at 5:35:00 pm

These memorials are guesses about what the future will hold.

Over here I rambled on thusly:

I don't know when the feeling of permanence settled on our civilization, but I tend to think it must have been relatively recently. It's jarring for people to see that feeling as something of an illusion. I notice changes in our architecture: is it just that we've run out of marble, or perhaps just that we now prefer crappy plastic brick-looking facades? Or on the other hand, does something in our subconscious tell us there's no point in designing buildings still to stand and symbolize our glory a century or so down the road?

The reason they've decided not to rebuild the WTC, despite the overwhelming desire of the public, is that our elites see the future as a blending and merging, ala Eurabia. In their view, while one segment of our big happy Earth family (Americans) wants to rebuild the towers, others of our big happy family (Muslims) cheered for their destruction. So we need to find something we can all agree on. Toss the pro-US people a bone by spewing all this empty lofty rhetoric, call it a "freedom" tower, whatever the hell that means; meanwhile, we also have to satisfy the Muslim portion of our big happy Earth family by demonstrating that the US is in fact humbled, by building something smaller and worse. Oh yes, but it will be 1,776 feet tall, glory glory hallelujah! (but 1,200 feet of that will be the world's longest coathanger, alhemdelallah).

These memorials look to me like people are guessing that in 100 years, the meaning of 9/11 will be this: the beginning of the transition of the U.S. into the sphere of Islam. The designers throw out just enough U.S. flags, bald eagles, pretty trees, etc., in an attempt to hide this fact from the not-too-sharp.

Do you believe this kind of crap is going to continue on?

I think the spirit of memorials will follow the trends: if it continues to look like civilization is preparing to fold, we will continue to design memorials that straddle the line between touchy-feely vapid triteness -- 'garden of remembrance and healing' type BS -- and affirmative celebrations of our enemies' victory. The crescent of embrace, and now the sphincter of embrace, might as well just be huge black flags with Arabic script, planted deep in our soil. On the other hand, if the tide turns and it looks like we've finally summoned the will to fight and win, then we will start to see memorials that anticipate that those viewing them in 50 years will be Americans rather than our Muslim replacements.

Interesting theory. I'll have to think about that for a few days before I could give it an honest chance.

My prejudice is just that these people are all a bunch of pussies who want to see the other side on everything because they have no morality of their own. They think you can build a bridge through dialogue, etc.

I'm in a really bad mood towards these dhimmis today.

If in 1939 someone had erected a stone on the beaches of Normandy with "Peace For Our Time -- Neville Chamberlain" carved on it, what would be it's impact now?

It would be a good urinal, which I guess is what this place is.