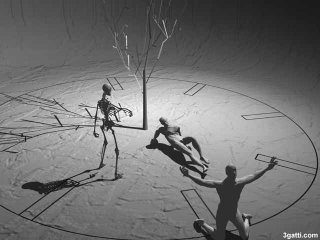 In recent weeks, I have been making the same statement over and over ad nauseum. Here it is:

There is not a single Islamic political organization, media outlet, academic institution, or government, of any appreciable size, anywhere in the world, which is moderate.

Those who read me are probably getting sick of hearing it. Perhaps, wondering if I have lost my edge, my ability to come up with new ideas on a daily basis. Maybe I have, because I confess, I am definately stuck on this idea. It seems to me there is no greater outrage in this world than this one simple truth.

I wonder whether many readers believe me when I write this, so on occasion I challenge those who read me to come up with one example of a moderate Muslim organization. I have yet to have a single commenter even attempt to rise to the challenge. And, if any do, I am extremely confident that I will be able to prove, in short order, that the organization is not at all moderate.

And, if there are any who do not believe me (for it is an extreme statement to make, even if true), well then, here is a Muslim who is saying the same thing as I (from the Toronto Sun):


In a recent column, Michael Coren, my colleague here at the Sun, demanded Muslims apologize for wrongs too numerous to list.

Coren is right. I, as a Muslim, apologize without equivocation or reservation for the terrible crimes -- small and big -- committed by Muslims against non-Muslims and against Muslims, as in Darfur, who are weak and easy prey to those who hold power in the name of Islam.

I imagine, however, Coren is not seeking an apology from a person of Muslim faith such as I, who maintains no rank and cannot speak on behalf of the institutionalized world of Islam.

Like many others who share his frustration and legitimate anger, Coren is asking to hear a contrite voice from within institutionalized Islam -- to repent for Muslim misconduct, past and present, that is indefensible by any standard of civility and decency, and seek forgiveness.

But Coren and others might well wait indefinitely for such an apology from those representatives of institutionalized Islam convinced of their own righteousness, even as they are engineers of a civilization's wreckage and prosper in it by the art of bullying.


Oh, we will not wait indefinately. Of that, I can assure you. The problem for moderates who are Muslim is that we are getting sick of waiting. And the day that we become completely fed up will be a very sad day for all of humanity.
Posted by Pastorius at 3:15:00 pm

Ever since 911 moonbats and liberal politicians have been seeking Moderate Islam and Moderate Muslims. They would have more success searching for the Holy Grail or Philosopher's Stone.

A Muslim is someone who believes that the Koran is the literal Word of God.

So, which aspects of "Kill the unbelievers wherever you find them" do the moonbats not understand? Or maybe it's possible to commit moderate murder on Jews, Christians, Hindus, Buddhists etc rather than extremist murder?

The Moderate Muslim is a mythical creature arising out of dhimmi wishful-thinking and Muslim taqiyya.

The world is blind. A menace is growing every day. It does not grow on a unified front. It is not organized as a country. It does not have a seat at the UN. Some of its membership worldwide are not participating in open acts of violence, yet the insidious oppressive nature of this force finds its ways in through the front door of openness and inclusion. Openness and Inclusion are doctrines of the West. They are noble and just. But taken to the extreme, these doctrines can bring in division and oppression. Peace at any price, meaning the absence of conflict, is the most costly form of peace. It means submission. The world, primarily the West, is submitting. This is the aim of the adherents to the peaceful force that I am describing. Islam.

Western society has two choices. Vanquish, or be vanquished.

Islam, by its nature, is not a status quo worldview. It is a jealous master. It will not submit by choice. If you doubt, open your eyes and read the Quran and the Hadith. Then read history. You can not come away from this study and find a worldview compatible with Western Civilization. This study coupled with today's headlines is a loud message from over a billion Muslims. It is visible everywhere, even in the UN. To miss this, one must willfully choose to disbelieve glaring evidence.

Understand, these encroachments on liberty will continue, and like a snowball at the top of a mountain, the onslaught will grow in size and speed. Ask yourself, why do I want to accept and appease Islamists? Is it because of your openness, your respect for multiculturalism? Or are you now starting to fear deep down inside. The hurried frenzy to negotiate and appease a fascist dictator in Iran is a great example of this problem. Iran will become a nuclear power if the world just keeps on negotiating.

How does it make you feel? Ahmadinejad, Iran's President, has stated numerous times that the Holocaust did not happen. He has also on numerous occasions called for the Muslim world to envisage a world without Israel. He is very direct in his statements. Ahmadinejad is not alone. There is a hunger in the Muslim world to see the destruction of Israel. It is not just Arabs. It is Muslims worldwide that desire the eventual removal of Israel from the map.

If you choose to willfully ignore the facts and believe that the threat can be negotiated with and contained, you are mistaken. Again, I ask you to conduct your own study. Read the Quran and the Hadith. Then read history. You can not come away from this study and find a worldview compatible Western Civilization. This study coupled with today's headlines is a loud message. It is visible everywhere, even in the UN. To miss this, one must willfully choose to disbelieve glaring evidence.

ROP,
It's up to all those who identify themselves as Muslims to let us know whether they are moderate human beings or not.

Know what I mean?

Bubba's Pravda,
I checked out you blog. That's a good blog and the comment you left here is a good post. You're doing a very good job there.

Thank you Pastorius. I appreciate your support. Let me know if I can ever help.

I have a different interpretation of the problem than Religion of Piecies. I would argue that Islamic moderation is philosophically possible, but sociologically impossible. In particular I think it is wrong to argue that a "Muslim is someone who believes that the Koran is the literal Word of God" implies too definite of a meaning. People interpret text as suits their interests, and that is true no matter how literal or fundamentalist they claim to be. And, of course, Muslims aren't required to be literalists anymore than Christians or Jews are. It is philosophically possible for the Muslims to all decide to interpret their religion as the same thing as Unitarianism with some interesting habits. Of course, that will never happen because the money in Islam goes to the most lunatic interpretations and because the muslims will kill anyone who actually attempts to create a warm and cuddly Islam. Admittedly, the Koran isn't helping matters, but it is a distant third in causing the problem.

Thinking it over honestly my disagreement with Religion of Pieces is overstated: when discussing the evil of Islam to the unconvinced I tend to quote the Koran in preference to my arguments above.

Demosthenes,
I agree with you that Muslims could choose to interpret the Koran differently. However, it is true that Muslims consider the Koran to be the final word of Allah, and that they believe Allah is beyond his creation, and therefore not approachable by reason.

Those two points make it very difficult for them to construct a tradition based on human reason.