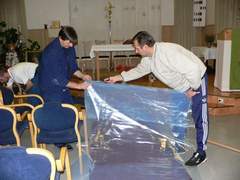 Police in Mosjøen have no suspects after the Catholic church in the city was vandalized and received a threatening letter last weekend.

The main window in the church was smashed when a cobblestone was hurled at it late on Friday night.

When the collection basket was emptied after Sunday mass, a letter with the following text was discovered, “Kill the Pope and all Christians”. According to local chief of police, Anbjørn Falkmo, there is reason to suspect that the two incidents are linked.

Falkmo says the police are treating this as a very serious incident.

- We have the letter in our custody and we’re going to hand it over to Kripos (special police unit) to see if they can come up with any leads. We are also in the process of calling in witnesses and hopefully get to the bottom of this, says Falkmo. -

OK, that's it. No, not you, Epa. Them. We need a coherent movement willing to stand up and say, "Oh, no you don't!" and among other things issue communiques right to the sources. It's way past time.