Freedom of expression no more - and yet... 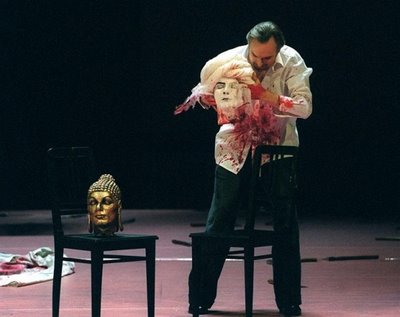 A small crisis has been arisen in , as a de-facto proof of limitation of free speech has presented itself.

A opera in has been cancelled fearing Muslim revenge. According to German news, German politicians are shaken and angry that the State Opera House of Berlin has removed the Mozart-opera, 'Idemeneo', from the program fearing an Islamist act of revenge. In the last scene Idemeneo beheads Buddha, Mohammed, Jesus and Prometheus exacting revenge for his son, who has been given as an offer to the Gods.

The Minister of Interior Affairs, Wolfgang Schäuble, Christian Democrats, stated Tuesday – "This is crazy. The decision is unacceptable. What is the value of freedom of expression if you limit it because of fear?"

A number of conservative politicians have criticized theater director, Ingrid Harms, for the decision and calls it "a knee fall for radical Muslims", "an attack on artistic freedom", or "or a censorship that endangers free expression".

Also German social democrats are furious. The Chairman of the German Parliament, Wolfgang Thierse, who grew up under Eastgerman censorship, states: "Now we have come so far, that artistic freedom has been limited. What will be next. Must we also limit the freedom of free speech and preaching?"

Ingrid Harms motivated yesterday her decision referring to the Danish cartoon crisis, and to 'concrete statements from the police, according to which, we would encounter insurmountable risks, if we were to present the opera.'

The police in , however, refutes the statement. "We just told the Opera, that the performance could be disturbed," a spokesman said Tuesday.

The Opera with the bloody last scene, was presented without disturbances in 2003 and 2004. The Berlin Senator of Culture, Ehrhart Körting (Social Democrats), admitted Tuesday, that he had spoken to the management of the State Opera, about a changed situation of risk because of the Danish drawings of the prophet.

The admittance earned the Senator harsh criticism from his boss, the Mayor of Berlin, Klaus Wowereit. "With respect for all concerns for security, I see no actual risk. Our values of openness, tolerance and freedom must be exercised offensively. We must not give in to the adversaries of our values."

It is the instructor, Hans Neuenfelds, who has actualized the challenge between Prometheus and Idemeneo to a challenge between 'all suppressing religions'. Thus he has decided to end his opera with the bloody scene.

Do I sense a shimmer of hope? I find it surprising and wonderful, that many politicians and even social democrats, stand up to defend the freedom of expression. But let us not forget that the Opera has been cancelled in fear of the Islamists. If it should be reinstated prepare for Islamist hysterics.
Posted by von Schlichtningen at 3:45:00 pm

Pussies....backing down and whimpering - that is what the terrorists want.

Good to see you posting.

Fox News Live showed the severed head of Mohammed scene this morning. How about that?

You know what I find REALLY odd? Every synopsis of this opera I've found on the internet gives the ending as - just as the king is about to sacrifice his son, the son's lover offers herself instead, and Neptune declares that the debt is paid because love has triumphed. The only the Idomeneo has to do is give up the throne to his son, which he does - and the son and his lover live happily ever after. What am I missing here? I tried looking up "Idemeneo" - different spelling, and Google asked me don't I mean, "Idomeneo", by Mozart? Can someone shed some light on this?

I get it. This is an addition in stage setting by Hans Neuenfels, which is not in keeping with the original libretto.

Yes, that's correct. However, it must be noted that this was not done to provoke Muslims. The severed heads of several religious leaders, including Christ, were included, and

THIS SAME PRODUCTION WAS PERFORMED TWO YEARS AGO WITHOUT INCIDENT.

Absolutely. Buddha, Christ, Mohammed and some other god's head were on display as Idomeneo stumbles on stage. I think giving in to Muslim bullying is totally wrong. And besides, in my opinion, it's too bad Mohammed wasn't beheaded before he caused all this trouble.

Good on you, Sumting Wong! Indeed, all the versions of Idomeneo have a (contrary-to-original-myth) deus-ex-machina ending in which Idomeneo's son gets saved and Idomeneo abdicates and everyone's happy.