Hamid Mir to Speak at November Symposium on Terrorism 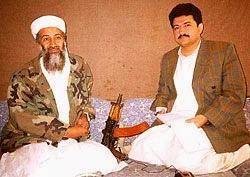 Below is the press release from America's Truth Forum:

Hamid Mir, the only journalist to have interviewed Osama bin Laden and Ayman al Zawahri since the attacks of September 11, 2001, will be the keynote speaker at a symposium addressing the origins and threat of terrorism presented by America’s Truth Forum, a grassroots, non-partisan, educational organization.

The symposium, titled, Understanding the Threat of Radical Islamist Terrorism, is scheduled to take place on November 11, 2006 in Las Vegas, Nevada. The symposium is open to the public. Tickets are $150 per attendee and require advanced purchase due to security protocol.

Mr. Mir, a journalist from Pakistan, founding editor of Daily Ausaf Islamabad and Bureau Chief of Islamabad for GEO-TV, is Osama bin Laden’s officially sanctioned biographer. Mr. Mir brings to the symposium first-hand knowledge, gained through his interviews with the world’s most wanted terrorist, of al Qaeda’s nuclear capability, an in-depth knowledge of al Qaeda and Taliban operations in both Pakistan and Afghanistan, evidence of Iranian support – both financial and strategic – for the Taliban and al Qaeda and an intimate knowledge of the ideology that fuels the mind of Osama bin Laden. Mr. Mir was recently captured and released by Hezbollah during the recent 34 day war between Lebanese Hezbollah and Israel.

America’s Truth Forum launches the symposium on Friday evening with a VIP Pre-Symposium Reception on November 10, 2006. Those in attendance will be provided the unique opportunity to personally interact with our speakers and other "prominent" guests. Tickets for the VIP Pre-Symposium Reception are $109.00 per attendee. Again, tickets need to be purchased in advance due to security protocol

For information and to purchase tickets: www.AmericasTruthForum.com or email staff@americastruthforum.com or call Jeffrey Epstein at (866) 709-3474.
Posted by Always On Watch at 12:36:00 am