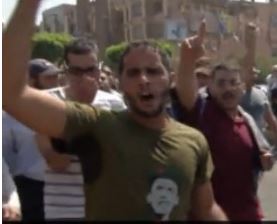 The announcement comes after security forces broke up two sit-in protests this week by those calling for the reinstatement of President Mohammed Morsi, a Brotherhood leader deposed in a July 3 coup. The clashes killed more than 600 people that day and sparked protests and violence that killed 173 people Friday alone.

Cabinet spokesman Sherif Shawki said that Prime Minister Hazem el-Beblawi, who leads the military-backed government, assigned the Ministry of Social Solidarity to study the legal possibilities of dissolving the group. He didn't elaborate.

Read more via the Associated Press...

AND THEN, THERE'S THIS: