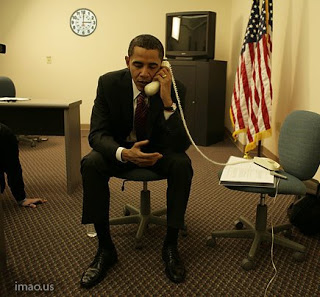 
Egypt is bleeding and angry. While the army and Muslim Brotherhood clash in the streets, at a high cost of hundreds of casualties in just one weekend, many Egyptians -- especially the military -- are furious at Washington. The United States, Egypt's number one ally in the world with an annual aid package of $1.3 billion, has all of a sudden become irrelevant. One can assume that this is not what the American president had in mind when he delivered his famous Cairo speech in 2009. In Egypt, Obama is seen not as the person who did not prevent Mubarak's downfall, rather as the person who supported the Muslim Brotherhood. At the same time, Obama could be perceived at home as breaking the law due to his refusal to recognize a military coup in Egypt, which would prohibit him from transferring aid funds. This is without doubt an awkward situation for the president.

Obama is humiliated. After he refused to answer U.S. Secretary of Defense Chuck Hagel's calls, Col. Gen. Abdel-Fattah el-Sissi, currently the strongest person in Egypt, also refused to answer a call from Obama. The Egyptian defense minister is waging a military campaign against the Muslim Brotherhood while simultaneously opening a diplomatic front against the United States. The cancellation of a joint military exercise with the U.S. is not much of a concern for Sissi. On the contrary, the cancellation is more of a concern for Jerusalem, which needs a friendly, professional and strong Egyptian army along its southern border.

Sissi can afford to maintain his aggressive stance against Washington. He currently still enjoys the backing of the Egyptian street, a large portion of the country's liberals. Mostly, he has found an alternative to American aid for his country, as Saudi Arabia, Kuwait and the United Arab Emirates have pledged $12 billion to re-stabilize the country and rehabilitate the economy.

The Saudis, incidentally, have a clear interest in offering help. With this one move they can support a military regime, which from their perspective will return Egypt to the days of Mubarak, and also exact revenge on Obama for abandoning a friend. The Saudi kingdom, as opposed to its sworn rival Qatar, is hostile toward the Muslim Brotherhood and supports the Egyptian army's actions to return the country to its pervious course.

The Egyptian street also finds it difficult to forget how the U.S. ambassador in Cairo objected to the "Tamarod" movement's initiative to organize massive protest rallies in late June, which culminated in the military coup on July 3.

The Tamarod movement won wall-to-wall support from the world for its open and particularly democratic nature. Over the weekend this same movement began signing a new petition calling for "ending American aid to Egypt," and which expresses its desire to cancel the peace treaty with Israel.This is all we need, that in its effort to appease the Egyptian street and completely turn its back on Obama, the army will also begin to turn a cold shoulder, heaven forbid, toward us. We have already seen how coalitions in the Middle East can change very quickly. Moreover, by hardening its attitude toward Israel, the army can find an easy way to garner the public's affections.Read the full story here.
Posted by Pastorius at 3:27:00 pm