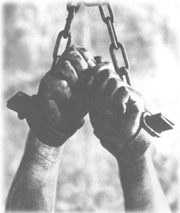 I guess he's not an "apostate" after all:


KABUL, Afghanistan - An Afghan court on Sunday dismissed a case against a man who converted from Islam to Christianity because of a lack of evidence, and he will be released soon, an official said.

The official told The Associated Press that the case had been returned to the prosecutors for more investigation, but that in the meantime, Abdul Rahman would be released.

"The court dismissed today the case against Abdul Rahman for a lack of information and a lot of legal gaps in the case," the official said Sunday, speaking on condition of anonymity because he was not authorized to speak publicly on the matter.

"The decision about his release will be taken possibly tomorrow," he added.Honestly, while I am happy that he is being released, this sounds like bullshit to me. They dropped the case because of legal gaps in the case?


I think we can surmise that means they do not agree that they were doing anything wrong, which, of course, means this will happen again.

Consider Afghanistan a Fear Society, not a Free Society. People in Afghanistan live under threat of physical intimidation, and death, for disagreeing with the government.

According to writings of Natan Sharansky, author of The Case For Democracy, one of George Bush's favorite books, Afghanistan is not a free country.

We need to be clear with ourselves about that, because if we are not we will sit back, instead of continuing to apply the intense pressure that will be needed to drag them kicking and screaming into the modern world.

By the way, it sounds to me like some international force had better be there to protect this guy when he is released.

Here is another paragraph from the AP article:


Earlier Sunday he was moved to a notorious maximum-security prison outside Kabul that is also home to hundreds of Taliban and al-Qaida militants. The move to Policharki Prison came after detainees threatened his life at an overcrowded police holding facility in central Kabul, a court official said on condition of anonymity because he is not authorized to speak to the media.

this is good news but the safest thing now is for this guy to get out of the country asap, from the reactions of the people in the street and statements of the so called "moderate" clerics, i dont think the afghani "democracy" is a safe place for him.

I am so happy that Abdul Rahman has been spared. But his release does take the heat off the information war.

So he was spared, not because it was wrong to execute him for thought crime, but due to lack of evidence? Fucking hell, Sharia law is fucking fucked!

Sharia is the Islamic Constitution. Therefore, if it is inserted into a Constitution containing a set of rights, as it was in Afghanistan, it can and most likely will nullify those rights, as Sharia will take supremacy over the other ideas.

I don't know. I have got mixed feelings on this one. Good, they are letting the guy out safe. Bad, they're letting him free inside the country. I talked with two of my American friends here today on this issue.

The first one talked about the Dubai scholars speaking on the same lines as the Taliban and discussed about how disturbing it was. He said that what the scholars said meant that whoever tried converting out of Islam will face something similar in Dubai too. Well that's that.

But the second dude said something that I can see happening right now. He said that Karzai will let this man go free because he wants the West happy, but he will let him loose inside the country to satisfy the Moslems so they can tear him apart.

I know you guys are happy, but as J said and I agree, he is not safe there. Too many cases like these in Pakistan, I didn't like them--I don't like this one either.

No, I said he will need to have an international team protect him. I said his life is in danger.

I want to be clear about that. I agree with you Avenging Apostate. Karzai merely tore the baby in half on this one.

Yeah - I guess the Muzzies can escape the responsibility for killing him directly if they turn him loose where the Taliban and al-Quaeda personnel can get him.

And that will get Bush off the hook too, since it will not have been his product, a fake "free society" that did the poor bastard in. Officially, that is.

Where are those Special Forces when you need them?

The US gives amnesty regularly, in some cases to people who have turned out to be terrorists. Why not give this poor man political amnesty and allow him to move here?