I saw the souls of those who had been beheaded because of their testimony for Jesus and because of the word of God. They had not worshiped the beast. 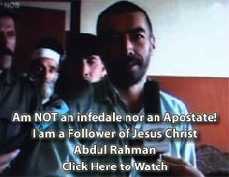 That's Revelation 20:4, in case you're wondering.

Check out what's going on with Abdul Rahman, the Afghani "apostate."


Abdul was taken into custody and a court case has followed. The story hit public TV on Thursday, March 16.

The newscaster stated that an Afghan citizen by the name of Abdul Rahman converted to the Christian religion 16 years ago.

He was questioned, "Do you confess that you have apostacized from Islam?"

He responded, "No, I am not an apostate, I believe in God."

Question: "Do you believe in the Koran?"

Response: "I believe in the Injil (New Testament) and love Jesus Christ.


Abdul Rahman is the man.

My understanding is that this is a child custody battle gone wrong.

This is a case where those american loudmouths in the House, Senate andin punditland seem to be missing.

Like the cartoon jihad, this touches the clear demarcation zone of liberal society, freedom of speech and religion and savage application of narrow mindedness, and faith in one's own thought being the correct of the immutable.

I see this here.
I see the few.
I see the importance ...but aside from a few mentions in a rather neutralesque fashion on Fox, I see no outrage over the pending execution of a man for his relgious beliefs in a nation WE FREED from 9th century murderers.

Voting alone does not make a democracy.

The prosecutors may be dropping the case.

Although in my eyes the very fact that this law is on the books is just wrong.

We may have 'freed' Afghanistan from a bunch of murderers, only to hand it, in essense, right back to them. The difference between the Taliban and the current cabal in Kabul is narrow indeed.

As long as the Koran is followed, the terrorism there will never end.

Epa said: Voting alone does not make a democracy.


That is a very important thing to understand. How is it that our own government doesn't seem to get it?
We're the ones who invented the Constitutional Democratic Republic.

Eteraz,
I agree. And just the fact that the judge said that if the guy doesn't renounce his "apostasy" means he will be put to death. The judge was willing to go through with sentencing this guy to death.

This guy is incredibly brave standing up for his beliefs in this manner. Of course he is only claiming human rights liberties which should never be questioned.

Epa, I agree entirely. Where is the outrage? This is comparable to the Christians being slaughtered in the Roman circus nearly two milleniums ago - if he is comdemned to death.

One small usually very PC party in Denmark asked for the Danish soldiers in Afghanistan to liberate the man if he is found guilty. This surprised me, but also showed that when the events become too outrageous there may be more support than we think.

I hope if he does get released due to his "insanity", he is somehow able to get out of the country. I don't think his life will be safe outside of prison either.

Wow, Von Schlicht, could you write on that Danish group who called for the army to intervene?

Are you a contributo here yet?

Yet we dhimmis must tolerate Islam

Prosecutors may drop the case? Saying that he is insane? I have read about so many such cases in Pakistan. How does that make anything better? They end up in mental institutions, usually because their own folks want them there.

If they ever manage to get out, they're dead. Islam...