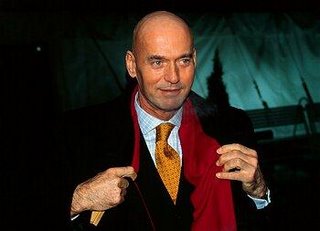 This excellent translation was done by fellow blogger Herr Winn at Klein Verzet, http://kleinverzet.blogspot.com/ Read the rest at my site, http://whatwouldcharlesmarteldotm.blogspot.com/ (I tried the links and failed. Feel free to laugh!!)
This article was written less than a month before 9/11 and has prominent mention in Bruce Bawer's book, While Europe Slept.

"The Cold War With Islam" (excerpt)

In the mean time the free and civilized West is extraordinarily naïve. We should get over our self-imposed shyness and articulate – and more to the point act upon – the fact that the greatest threat to world peace is Islam, bearing in mind that the difference between liberal and fundamentalist Islam is only relative. In Indonesia, for instance, complete disintegration looms large, with daily murders accompanying, as a result of the claims made by an islam that doesn’t tolerate contradiction, let alone room for those of different opinions. Of course the vanguard is made up of murdering and plundering fundamentalist youth. The reward is honor for the family and direct access to a heaven with and abundance of virgins. What else could you wish for!

There is nowadays hardly a conflict in the world, whether it be a civil war or a war between two or more countries, where Islam does not play a large role. The Middle-East, Indonesia, the Balkan, India-Pakistan, Chenchnya, Turkey, numerous African countries. During the Cold War the West knew exactly who threatened our value system: communism from the Soviet-Union, Eastern Europe, China, North-Korea, North-Vietnam, Cuba, etcetera. In hindsight history proved us right. Communisms role is all but played out, but taken over by Islam.
Posted by Kiddo at 4:02:00 pm