When we heard a couple of weeks back that Al-Qaeda had made a statement in support of the Islamic terrorist group Hamas, news reports of statements by Hamas spokemen claimed that they rejected the support of Bin-Laden's terror network. Good news huh? Or was it just a facade? We can assume from Al-Qaeda's statement that they obviously support the "palestinians" desire for the extermination of Jews and the eradication of Israel and it was the "palestinians" who voted overwhelmingly for Hamas, who's charter calls for the slaughter of Jews and desctruction of Israel. Sound like two peas in a pod, right? So why didn't Hamas declare their support for an alliance with Al-Qaeda? Was it because one already existed and the Al-Qaeda statement was just a way of making this fact common knowledge for those willing to read between the lines, knowing that Hamas would refuse support, as this would make it impossible for western cowards to support the "palestinian" terror group if they knew an alliance like this existed?
Read on and decide for yourself whether there really is no Al-Qaeda in Fascistine : 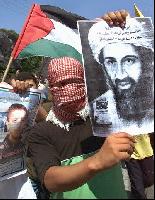 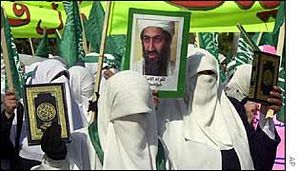 Two youths in their 20s from Nablus were charged by a military court on counts of being hired by the Jordanian branch of al-Qaida to perform terrorist acts in Israel. Their trial was to begin next month.

The two, Azzam abu el Adas and Bilal Hasnawi were arrested three months ago at the Allenby Bridge connecting between Jordan and the West Bank near Jericho, Israel Radio reported.

The planned terrorist attack, according to the indictment, was to take place at the French Hill in northern Jerusalem, and was to include both a car bomb and a suicide bomber.

The car bomb was planned to explode in a road just outside a local restaurant. Once the explosion occurred, the other terrorist was expected to blow himself up inside the same restaurant.

Adas and Hasnawi allegedly demanded 5,000 Jordanian Dinars from their al-Qaida handler for the preparations, including renting an apartment in Jerusalem that would house the suicide bomber before the attack.

Abu-Kuadma, the al-Qaida representative, said he would look into the matter, and asked them to recruit educated people "like Osama bin-Laden," who may serve as suicide bombers.

The two Palestinians were also suspected of planning suicide bombings in the old Central Bus Station in Tel Aviv and in Bat Yam
Link...

I like that name you coined for the Peaceful State.

:) i used to use it a lot on my site way back when i first started blogging, not quite sure why i stopped using it actually

Hey, I sent you an email. I hope you got it.

These morons all have the exact same root.

The muslim brotherhood of Egypt, and it educational wing at King Abdul Aziz U's school of Islamic studies where Sayd Qutb's brother, Muhammad taught Adbullah Azzam, the palestinian who went on to fame and getting blown up (and said Jihad is the peak of Islam), and the other tall guy with kidney problems.

Anyoen who thinks there is a differnce is nuts.

Hamas simply wants to deal with the near kufr NOW. Al Qaeda always wanted the main enemy, but mis-strategized.

Israel could give a shit less, is my guess, and will simply start having targeted killings of Al Qaeda.

It will be the best thing for all of us.