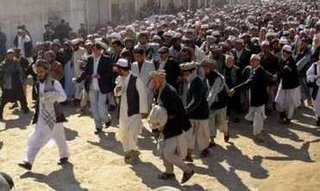 Our allies the Afghanis, those of the new "Islamic Democracy" we helped to create, are arresting more Christians in the wake of being forced to give up their first Moloch meal:


KABUL, March 28 2006, (LifeSiteNews.com) – US-based Christian news source, Compass Direct, reports that more Christians have been arrested for their faith in Afghanistan in the wake of the release of Abdul Rahman.

Compass, a news service that tracks persecution of Christians mostly in Islamic countries, says harassment of the Christian community has been stepped up.

Compass says two more Christian converts have been arrested in other parts of the country, but further information is being withheld in the “sensitive situation” caused by the international media furor over Rahman.

Reports of beatings and police raids on the homes of Christians are filtering out of the country through local Christian ministers.


Let us, the creators, take responsibility for our creation. Those are our tax dollars at work. Lives, guns, bombs, all our resources, went to creating this.

We are responsible for it. The blood is on our hands. We sign the death warrant of Christians.
Posted by Pastorius at 10:24:00 pm

This kind of legalised murder never happened in formerly Muslim India during the British Raj.

Gung-ho colonialism had its faults, but ...

Colonialism would be more ethical than what we have participated in creating in Afghanistan.

How much of a stinking, festering pile of pig's-poo does a cult have to be, that it can only keep its adherents noses stuck in it by threatening to chop their heads off?

Islam is a hate cult, pure and simple. Hatred of 'The Other' is the essential driving force. Take that away and there's nothing left.

Rabbi Hillel was challenged to summarise the meaning of the Jewish scriptures while standing one one leg:
"Do not do to another what would be hurtful to you. All the rest is commentary".

Jesus summarised Christianity by saying "Love your neighbor as yourself"

How might a Muslim summarise the Koran while standing on one leg?

Somebody get that guy 72 virgins.

Does anyone think that Bush has "gotten it" yet?

Cubed,
He sure is getting it.

Anonymous suicide bomber speaking from the grave, and still concerned with what his wife thinks.

Now, that is a faithful man.

ok, heres the test..does it take world intervention to save people from the barbarity that is mohamadism or will karzai stand up and free these people as well.

Does Karzai believe in Human Rights? We don't even know, do we?

It's true we created a situation in Afghanistan. We got the Taliban out of power, we closed down Al-Qaida's unfettered base of operations, and we began the process of self rule for the Afghanis.

Now the government, whose new constitution protects freedom of religion, is in conflict with the Imams and citizens who support Sharia law. (pretty much the same conflict you find across the middle east)

It's a bad situation, but I have to think it's better than the place we came from. The Taliban weren't known for their religious tolerance.

Let me be clear, I am not saying that the situation in Afghanistan is not better than it was. Women go to school now, the Taliban is out. That's all good.

The thing I am angry about is that we could have forced real change, as we did in Japan and Germany in the aftermath of WWII.

Oh I agree that more control would solve many of the problems there. I just doubt that it would be accepted either in the US or in Europe. We had, and still have, our own people screaming that this is just a scheme to enrich the president's friends. Imagine how they'd bleat if we were directly administering the governments in Iraq and Afghanistan.

For better or worse we promised to allow them autonomy. Maybe we should have been more aware of the depths to which Islam can sink, you're right.

But we aren't without influence in the matter. Afghanistan still needs tons of aid in order to rebuild. They need trade and outside investors. At this point we can make it clear that all outside help is in jeopardy so long as this kind of thing is happening.

I think the courts will change because the government will force them to change. Sadly, I don't think people will ever change.