This Cleric talks about Jihad, fighting alongside Bin-Laden and how the Saudis are the most enthusiastic of all Muslims to carry out the Islamic "holy" war against the non-believers. This is must watch video : 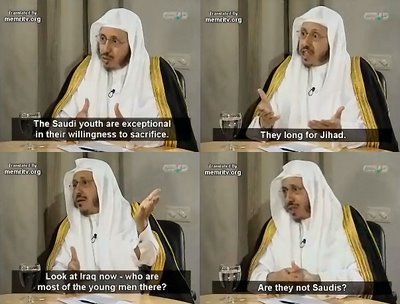 [click the picture for the video]
Extract from transcript :

Following are excerpts from an interview by Saudi cleric Musa Al-Qarni, the former Mufti of Bin Laden. The interview aired on Dubai TV, on March 18, 2006.

Musa Al-Qarni: The concept of Jihad is a matter of faith and Islamic religious law, which lives in the mind of every Muslim on the face of this earth. The religious education we receive through our schools, through our religious jurisprudence, our thinking, and our tradition - Jihad is part of this.

When we used to read the books about the laws of Jihad, the laws about raids, and the laws about prisoners - at a time when the nation was not in a state of Jihad, but in a state of feebleness, apathy, and subordination - we used to think that reading the books on Jihad was a kind of entertainment, and that Jihad was a thing of the past. We used to study the laws of Jihad as if it were an issue of history, not of reality.

Interviewer: There was incitement from the pulpits and in the universities in Saudi Arabia.

Musa Al-Qarni: Of course. At that time...

Interviewer: You reached Afghanistan during that period. The young men you met back then - how old were the people who went to join the the Afghan mujahideen?

Musa Al-Qarni: Most of them were between 15 and 25 years old.

At no point in his life was Osama an ordinary man. That is something we must acknowledge.

He came from one of the richest families throughout the Gulf countries, a family known for its ties with the political regime here in Saudi Arabia, because of its construction projects and so on. In addition, he took with him [to Afghanistan] financial support. He brought his own money and the money of his family, and he also used his social influence here, as a preacher for Jihad for the sake of Allah, to collect contributions. In addition, he had exceptional ties with the decision-makers, and with society as a whole here.

Interviewer: I am asking about Afghanistan.

Musa Al-Qarni: He was prominent there.

Here in Saudi Arabia, the young men who were about to go to Afghanistan, would undergo mental and psychological preparation. They would be included in a group of people who would go together.

Let me give you an example. Now that Jihad has become a "crime", some people may be surprised by what I am about to say: At the Jedda airport there was a group of mujahideen whose job was to welcome those who arrived on their way to Pakistan. There were also offices in Jedda that would buy discount tickets for the people going to Afghanistan.

His ambition to wage Jihad preceded the war in Afghanistan. I have mentioned this in the past. Even as a young man Osama bin Laden had the ambition to wage Jihad. I have mentioned in several interviews, and it is a well known fact that when there were problems in Syria between the Syrian regime and the Muslim Brotherhood - and this was known throughout the world - Osama thought of going to Syria to join the Jihad of the Muslims there. The spirit of Jihad was deep in the soul of Osama bin Laden.

Interviewer: You used to be his mufti, his advisor on Islamic law?

Musa Al-Qarni: Perhaps he considered me something of the sort, but I...

Interviewer: Did the others also view you this way?

Musa Al-Qarni: Look, brother Daud, I am not looking for titles for myself. But let me tell you, my relations with Osama... He would definitely consult with me on matters of Islamic religious rulings.

Interviewer: You didn't participate in the battles of Jihad?

Musa Al-Qarni: Of course I did.

Interviewer: Did you fight?

Musa Al-Qarni: I participated in several battles. I fought together with Sheik Abdallah 'Azzam and with Osama bin Laden...

Interviewer: Did Osama bin Laden play any military role? or was his role primarily one of funding, guidance, and command?

Musa Al-Qarni: In the early stages of Jihad, Osama bin Laden's role was one of funding and mobilization. But once camps were set up especially for Arabs, Osama's role became more direct, and he personally took part in battles. He drew up the military plans, and appoint the commanders. He was the military supervisor over all of the camps. You might say, even if it wasn't that explicit, that he was the military commander of the Arab mujahideen in Afghanistan.

Interviewer: Why did Osama bin Laden choose 15 out of the 19 from Saudi Arabia?

Musa Al-Qarni: I do not mean to belittle other nations, but let me tell you, our experience of the Jihad in Afghanistan has shown that the Saudi youth are exceptional in terms of their sacrifice and their courage. They are exceptional in their love of Jihad, and in their desire to reach the world to come, to reach Paradise. They do not hesitate.

The Saudi youth are exceptional in their willingness to sacrifice. They long for Jihad. Look at Iraq now - who are most of the young men there? Are they not Saudis? Despite the difficulties and obstacles, the Saudi youth do not listen to any authority or to any call [to refrain from] Jihad for the sake of Allah.

Look at Bosnia-Herzegovina - the Saudi youth were most of those who were martyred there, weren't they?
Link...

if they could get rid of the niqab in saudi it would solve half of the problems cuz then you could chase tail in your city and don't have to go to paradise.