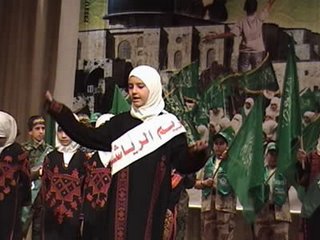 Both Atlas Shrugs and Little Green Footballs are reporting on the Hamas Terror Festival For Children which is happening this week in the Palestinian territories.

This little girl is wearing a sash emblazoned with the name "Reem Riyashi"; a female suicide bomber who killed four people.

Christian children go through the Confirmation process. Jewish children have Bar or Bat Mitzvah's; where they learn that they need to be a blessing to the world by carrying forth the Word of God and helping to heal the world.

Meanwhile, Palestinian children are groomed in the ways of terror.

Atlas has the scoop:


The Hamas terror organization, which will take control of the Palestinian Authority this 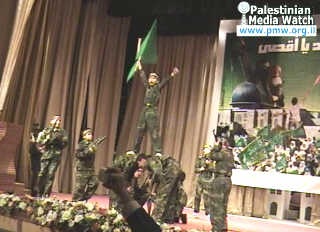 week, has been promoting the use of children to perpetrate violence and terror.

The Hamas placed pictures of children in combat roles and combat dress on its web site for one week. The pictures were taken at a “Palestinian Children’s Festival” in Yemen.

The Yeminite press reported on the festival. Yemen News said, “A Hamas representative [in Yemen] Jamal Issa … stated that the Palestinian children fight alongside the adults in the resistance."


Here's a link to a Palestinian website reporting on the children's festival.
Posted by Pastorius at 2:00:00 pm

And people view this as being different than the KKK HOW, exactly? They deserve a right of return alright. A return to the rocks they crawled out from under.