The other, other bad guy

Hassan Abbasi has a dream--a helicopter doing an arabesque in cloudy skies to avoid being shot at from the ground. On board are the last of the "fleeing Americans," forced out of the Dar al-Islam (The Abode of Islam) by "the Army of Muhammad." Presented by his friends as "The Dr. Kissinger of Islam," Mr. Abbasi is "professor of strategy" at the Islamic Republic's Revolutionary Guard Corps University and, according to Tehran sources, the principal foreign policy voice in President Mahmoud Ahmadinejad's new radical administration.

For the past several weeks Mr. Abbasi has been addressing crowds of Guard and Baseej Mustadafin (Mobilization of the Dispossessed) officers in Tehran with a simple theme: The U.S. does not have the stomach for a long conflict and will soon revert to its traditional policy of "running away," leaving Afghanistan and Iraq, indeed the whole of the Middle East, to be reshaped by Iran and its regional allies.

To hear Mr. Abbasi tell it the entire recent history of the U.S. could be narrated with the help of the image of "the last helicopter." 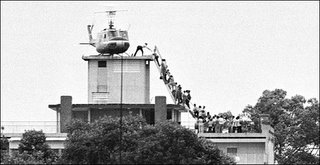 It was that image in Saigon that concluded the Vietnam War under Gerald Ford. Jimmy Carter had five helicopters fleeing from the Iranian desert, leaving behind the charred corpses of eight American soldiers. Under Ronald Reagan the helicopters carried the corpses of 241 Marines murdered in their sleep in a Hezbollah suicide attack. Under the first President Bush, the helicopter flew from Safwan, in southern Iraq, with Gen. Norman Schwarzkopf aboard, leaving behind Saddam Hussein's generals, who could not believe why they had been allowed live to fight their domestic foes, and America, another day. Bill Clinton's helicopter was a Black Hawk, downed in Mogadishu and delivering 16 American soldiers into the hands of a murderous crowd.

According to this theory, President George W. Bush is an "aberration," a leader out of sync with his nation's character and no more than a brief nightmare for those who oppose the creation of an "American Middle East." Messrs. Abbasi and Ahmadinejad have concluded that there will be no helicopter as long as George W. Bush is in the White House. But they believe that whoever succeeds him, Democrat or Republican, will revive the helicopter image to extricate the U.S. from a complex situation that few Americans appear to understand.

WHO IS THIS SON OF A BITCH ADVISOR OF THE GALACTIC TWERP?

Continue reading "The other, other bad guy" at VWT »

The U.S. does not have the stomach for a long conflict and will soon revert to its traditional policy of "running away"...

And just why would he think so? I think we know the answer here at IBA.

What really is scary is, I hate to admit, is much of this guy's assessment of the west (in its current state) is true. The helicopter anology was very good.

We can change but again people still need to take their heads out of the sand. This kind of stuff needs to get out to the public!

I am still amazed at the lack of knowledge in the US about the cartoons. In my own informal survey at my work, 15 people had not seen the cartoons and 4 had. 75% of the people were ignorant!

And Iran is a definitive and demonstrative threat to our security interests. And why is GWB not pushing for a HUGE shift in our energy policy??

It's highly misleading to say that the Vietnam War was concluded under Gerald Ford. It was our traitorous Democrats, including Ted Kennedy, who controlled Congress and who voted to end all military aid to the South Vietnamese. Out of gasoline, bullets and supplies, the South Viets had no means of further resistance and were soon overrun.

Kennedy claimed that by ending aid he was ending the war; but he had begun the Communist genocide that followed, where 2.5 million SE Asians were then slaughtered by the Communists.

If you want to PRECISELY what this little prick is so confident over... check out the comments at Alexandra in the last few days.