The unbleievable Tony Blair falls for the unbelievable! 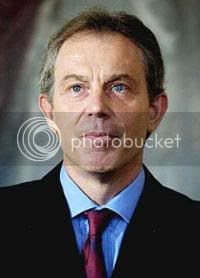 "The most remarkable thing about reading the Koran - in so far as it can be truly translated from the original Arabic - is to understand how progressive it is. I speak with great diffidence and humility as a member of another faith. I am not qualified to make any judgements.

But as an outsider, the Koran strikes me as a reforming book, trying to return Judaism and Christianity to their origins, rather as reformers attempted with the Christian Church centuries later. It is inclusive. It extols science and knowledge and abhors superstition. It is practical and way ahead of its time in attitudes to marriage, women and governance.

Under its guidance, the spread of Islam and its dominance over previously Christian or pagan lands was breathtaking. Over centuries it founded an Empire, leading the world in discovery, art and culture. The standard bearers of tolerance in the early Middle Ages were far more likely to be found in Muslim lands than in Christian ..."

No, Tone, the most remarkable thing about the Koran is precisely how regressive it is! What have you bin smokin’?

How can you possibly stand before an audience of educated, intelligent people and pronounce such balderdash?

If the Koran is so "progressive", and so "ahead of its time", then how come Muslims are so backward? How come Muslims wish to kill apostates, people who can no longer stomach the lies, the myths, the fairy stories propagated by the prophet of Islam? How come women, if they are not obedient, have to be beaten until they are prepared to be submissive to their husbands? How come women should be stoned to death for the ‘serious crime’ of adultery (while the men, the adulterers, will miraculously get away with it)? How come the Muslim world has contributed virtually nothing to human endeavour for approximately five hundred years? How come rates for adult illiteracy are so high in Muslim lands? How come? How come? How come?

Oh, and by the way: About that 'abhorring superstition' bit… Didn’t you know, Tone, that Muslims believe in Jinns? And didn’t you know, too, that they believe that two angels sit permanently on each person’s shoulders? The one on your left shoulder taking down notes on your bad deeds, and the one on your right shoulder taking down notes on your good deeds?

You did'nt mention the imaginary satan at wich they throw stones every year. In the process of all of this humbug a lot of people (believers) get trampled and die every year. He must have heard about this! He's playing dumb (dhimmb)!

When he said this was he surrounded by 3 Jihadists with sharp knives?

No, I didn't. I should have, though. But if all were listed, I don't think this virtual page would be long enough.

Do you think this could be a logical explanation for it? There is no other.

Blair's innate liberalism renders him vulnerable to the deceits of the ROP. As you say, how can any sane person describe the Koran as "progressive" when it would drive us back to the dark ages!

Convert already then, maybe then you'll be able to make your wife shut up.

Given that communism was consider progressive a few decades ago, and fascism was the rage among Italian Futurists, I don’t necessarily consider “progressive” a complement.

Sorry, Tony but “the spread of Islam and its dominance over previously Christian or pagan lands” isn’t a good thing.

And “leading the world in discovery, art and culture” was despite Islam and before Greek philosophy and Hindu influences were finally snuffed out by Islam.

But not the cliche: “The standard bearers of tolerance in the early Middle Ages were far more likely to be found in Muslim lands than in Christian.” If you have to hold the bar that low, Tony, to get a good comparison, you’re being silly. It’s like saying that Tony Blair has a temper but at least he’s not Charles Manson.

No sane, knowing person would or could, simply because it most obviously isn't.

Well, that's one way of doing it, I suppose.

Thanks, Mark. I've been threw these clichés before ... we all have.

I see there’s a new book out that looks interesting: Islamic Imperialism: A History by Efraim Karsh. He just happens to teach at King’s College, Univ of London, which must not be too far from 10 Downing Street. Perhaps it’s time for Mr. Blair (and Mr. Bush, for that matter) to go back to school.

To the Multiculturalist, all religions are equaly valid.

To the Philosopher, all religions are equally false.

To the Politician, all religions are equally useful.


If the balance of power depended on the Wiccan vote, you could guarantee Tony and Cherie would be out in the Woods dancing naked under a full moon.

Mustafa,
If the balance of power depended on the Wiccan vote, you could guarantee Tony and Cherie would be out in the Woods dancing naked under a full moon.

I can see it now! Avert eyes immediately.

I'm going to check that book out.

Yes, I think you are right. The Blairs do seem to need to go back to school, don't they?

Can't we just imagine them dancing in the moonlight?