The Media's Latest Lie – A "Civil War" in Iraq 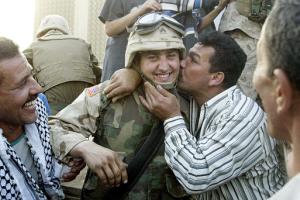 Courtesy of Winds of Change, here's a devastating rebuttal of the latest line of BS about Iraq to effuse from the (leftist) Mainstream Media:

It is a wonder that the Blogosphere hasn’t picked up on the latest media “Frame” on the war in Iraq – that Iraq is in purportedly in the middle of a civil war - and taken it apart like the propaganda it is.

What is going on in Iraq today is a losing terrorist campaign hyped by media spin as a civil war because the public no longer believes their prior “frame” that we were losing to the terrorists . This is easily proven with a simple comparison with Bosnia Herzegovina’s real civil war in the early-to-mid 1990s. Today there are 26 million Iraqis, according to the CIA’s Fact Book. There are four million Bosnians of whom about half (two million) are Muslim.

Bosnia Herzegovina’s Muslim population lost 200,000 dead in four years from 1992-1995’s civil war with the Serbs. That averages about 50,000 dead a year of two million Muslims, about one killed per forty people per year.

If the civil strife in post-liberation Iraq matched that of real civil war in Bosnia ten years ago, there would be 650,000 Iraqi fatalities per year – say 1800 dead Iraqis a day from “sectarian strife” to match the average death rate of Bosnia Herzegovina’s civil war.

That is not happening and neither is Iraq’s “Civil War.” It isn’t even close. There have reputedly been only about 37,000 Iraqi civilian fatalities (not including terrorists - the MSM likes to count terrorist casualties – including foreign aka non-Iraqi terrorists - as Iraqi “civilian” casualties) from violence in the three years of American occupation. That would be less than a month’s losses if Iraq were suffering from a real civil war like the one in Bosnia.

The MSM is flat out lying about a civil war in Iraq just as they have lied about everything else in Iraq. They invent new lies when their old ones are disbelieved. Yet they wonder why their audience and circulation drop.

Ralph Peters complained recently that the MSM’s reporters were all “phoning in” reports from stringers while hiding in hotels in Baghdad’s green zone. It looks to me that the MSM editors and reporters have gotten even lazier than that. Rewording the press releases of war opponents is easier, cheaper and safer than the hard work of reporting real news…especially if that news doesn’t say the propaganda you want it too.

I'm going to mail that photo to MSM outlets in Germany, France and to the BBC, under the subject heading:
"More shocking photos of American terrorism and abuse in Iraq!"

While I agree the MSM is very lame and becoming more far-left, I don't agree with this article. I've never heard any definition of a civil war that is based solely on the body count. To use that argument lends itself to tunnel vision and is basically just wrong. it seems to me that Iraq has been in a civil war for quite a long time, well before the war (operation iraqi freedom) started. If this is ignored, you may end up getting the body count you are talking about.

The Sunnis are in no condition to provide any sort of serious, organized resistance to the ruling Kurds and Shiites. Sporadic IEDs and shootings is not 'organized resistance', except to the idiotic MSM reporters who don't know a damn thing about military affairs. The enemy can't operate any units larger than squad level (larger than 10 men). Why? Insurgent units bigger than that tend to get wiped out, quickly, by Coalition units, which have superior firepower, communications and mobility. So the 'civil war' argument doesn't hold water for these reasons also.

The real problem is preventing the majority Shiites and Kurds from carrying out some ethnic cleansing of their own. They hate the Sunnis and would love to see an Iraq that's Sunni-free. If the majority gets mad enough, this will happen and the Sunnis will not be able to stop it. This is precisely why so many Sunni leaders are desperately trying to negotiate with the government now, in order to get the best possible terms.