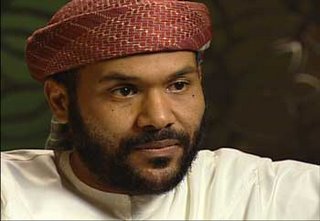 In the First Television Interview of an Al-Qaeda Member Close to Osama Since 9/11, Abu Jandal Offers First-Hand Details About the Most-Wanted Man in the World. A former personal bodyguard of Osama Bin Laden says he is certain the al-Qaeda leader is planning an attack on the U.S.

In the first television interview with an al-Qaeda member close to bin Laden since 9/11, Abu Jandal tells Bob Simon first-hand details about the world's most wanted man for a 60 MINUTES report to be broadcast Sunday, April 2 (7:00-8:00 PM, ET/PT) on the CBS Television Network. Abu Jandal, who was with bin Laden in Afghanistan from 1996 to 2000, says bin Laden's last tape on which he threatened consequences to the U.S. is not a threat, but a promise.

"When Sheik Osama promises something, he does it. So I believe Osama bin Laden is planning a new attack inside the United States, this is certain," he tells Simon in the interview conducted in Yemen earlier this month.

It's been long speculated that bin Laden is hiding in the tribal areas of Pakistan, but Abu Jandal says Afghanistan is the place. "Not Pakistan. I know the Pakistani tribe along the border very well. Yes, they can be very trustworthy and faithful to their religion and ideology, but they are also capable of selling information for nothing," he says.

Even if found, bin Laden will not be captured, says Abu Jandal, whho says the al-Qaeda leader gave him the authority to kill him if he was surrounded. "If he was going to be captured, Sheik Osama prefers to be killed than captured," he tells Simon. "There was a special gun to be used if Sheik Osama bin Laden was attacked and we were unable to save him, in which case I would have to kill him," says Abu Jandal.
Posted by Pastorius at 9:22:00 pm

Does this fit the "honorable" definiton of a martyr? Shouldn't the enemy kill him? Or go down in flames as one is taking out the enemy. This seems weak and cowardly! He does not have the balls to face his enemies!

JMJ,
You have probably heard that Adolf Hitler had only one testicle.

Well, apparently, one of Osama's pediatricians has testified that the poor little sheikh was born with only half a testicle.

That explains his effeminate behavior.