Moderate Muslim Story Of The Week 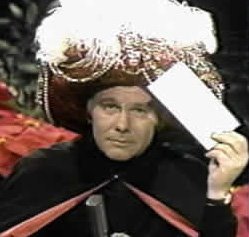 This is one of the stupidest things I have ever read:


"She just thanks the Qaba she wasn't stoned to death."

NEW DELHI - Village elders ordered a Muslim man in eastern India to leave his wife after he accidentally divorced her in his sleep, a news report said Tuesday.

Aftab Ansari uttered the Urdu word for divorce, “talaq,” three times in his sleep, prompting his worried wife to discuss the matter with her friends, according to the Press Trust of India news agency.

Under Islamic law, a husband need only say “I divorce you” three times to secure a permanent end to his marriage.

Muslim leaders in the couple’s village in West Bengal state found out and decreed that Ansari’s unconscious utterances constituted a divorce, PTI reported.

But 30-year-old Ansari said he had no intention of leaving his wife of 11 years. “I have not given talaq. When I uttered talaq three times I had taken medicines to help me sleep,” he was quoted as saying in the report.


And, just when you thought the story couldn't get any stupider:


The religious leaders said that before remarrying, the couple would have to be apart for at least 100 days and that the wife, Sohela, would also have to spend a night with another man and then be divorced by him.


Yes, as so often happens with Islam, comedy descended into tragedy.
Posted by Pastorius at 10:51:00 pm

Is this story for real, or it is a joke ?
Because if this is real...
well..
I have no words to say what I think about people "thinking" in that way...well..it is too much said - thinking - because this cant be the result of thinking.
p.s.
still hope to be a joke...I'm affraid to think that this is real.

There are your moderate muslim leaders of the week.

It must be some consolation to the woman that she isn't being stoned to death.

Wonders if the husband will truly divorce her if she sleeps with the other man?

I thank whoever it is I believe in, every waking moment, that I am not a muslim.

Seems to me that the wife probably made up the story to get rid of him.... she is the only witness, she openly talked about it to others...she must have known the consequences...what is the probability someone will really say "I divorce you" 3 times in their sleep? It's still a story full of stupid idiots, but I think one person, the wife, has her wits about her.

I liked your idea, so I changed the title of this post.

Anonymous,
Seems to me that the wife probably made up the story to get rid of him

I had the same thought.