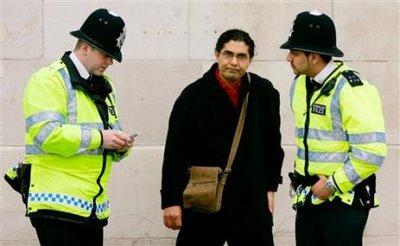 "British police officers speak to Iranian Reza Moradi, 29, who displayed a banner containing the controversial Danish cartoons of the Prophet Muhammad, at a demonstration rally supporting freedom of expression in Trafalgar Square, London, Saturday March 25, 2006. About 200 people held a free-speech demonstration in central London on Saturday, with several displaying posters of the cartoons that infuriated much of the Muslim world."

Oh the horror, he was displaying a cartoon of the Muslim "prophet" Mohammed. Why couldn't he have just displayed a banner calling for the beheading of all non-Muslims, then there wouldn't have been a problem. [via yahoo news, click the picture for the link]
Posted by J at 11:48:00 pm

The once reliable commonsense no-nonsense British Bobby is now a Blairite multi-culti PC robot. Remember the Met oficer who 2 hours after 7/7 said 'The words Islam and Terrorism don't belong in the same sentence, this attack has nothing to do with Islam which is a religion of Peace'

I almost feel like voting for the BNP except you'd probably get another deviation from traditional British policing. Pincers, electrodes, piano wire, acid baths etc.

The Thought Police? Puts me in mind of Orwell's 1984. My literature class is reading an excerpt this well. I wonder if some of them will see the parallels today. I'll find out in our next class session.

Now all the radicals not only know that Reza Moradi insulted a dead man, but they know what he looks like too. I'm sure they'll want him dead too. Watch out, Reza, they have their eyes on you.

They saw he was brown, got confused and let him go. No seriously, the police didn't actually do anything as such. Quite why they took him to one side, I don't know. Are they unable to make rational judgements for themselves?

Many people complained at the time of the disgusting display outside the Danish embassay a few weeks ago. One was threatened with 'being nicked', the police officer agressively asserted thei right to freedom to solicit murder. Twonks.

As Ibn Warraq so appropriately quoted in the introduction to Why I'm Not A Muslim, I shall repeat here: John Stuart Mill: "Strange it is, that men should admit the validity of the arguments for free discussion, but object to their being 'pushed to an extreme'; not seeing that unless the reasons are good for an extreme case, they are not good for any case."