Thought Police Show Up In Full-Force At London Rally 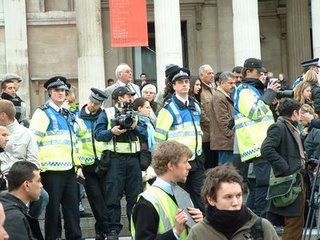 Michael Totten makes a very important point about the goings-on at the London Freedom of Expression Rally:


One of the ways in which the police in repressive societies intimidate people is by turning up at protest meetings and taking pictures of them. What, then, are we supposed to make of this behaviour in London yesterday?

Note that this is the same Metropolitan Police that did nothing about demonstrators who incited to violence in May 2005 and then only responded in February 2006 after a public outcry.

They weren't very observant. We got followed by a group of hostile Muslims, who came into the pub and tore up a fellow bloggers sign. They were photographing the decent folk, meanwhile we have angry Muslims following peaceful protestors. What a joke.

Dude,
Will you post on that. That's important info.

this brings a couple of things to mind. the first was the pro terror rally last year, the police escorted the protesters who were waving the hezbollah flags and those screaming for the destruction of "israeli cancer", and also the 3rd of feb, behead the infidels rally, in which the police were within the crowd and not taking any photos at all.

this is a fact we have to face, muslims terrorists can call for jihad on the streets of london and face no police response, yet if you protest against the jihad, you face getting nicked.

<naive>I don't really understand why they were there looking inwards... Surely the only need for them being there was to protect you all from those against freedom of speech?<s/naive>

Hey Pastorius, yes dude, made a little post over at drunken about the incident. Hardly a nuanced critique, but that's just about what happened.

They did exactly as they did at the Freedom of Expression rally. Took pictures.

Can't say fairer than that.